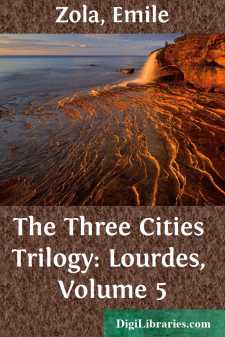 AGAIN that night Pierre, at the Hotel of the Apparitions, was unable to obtain a wink of sleep. After calling at the hospital to inquire after Marie, who, since her return from the procession, had been soundly enjoying the delicious, restoring sleep of a child, he had gone to bed himself feeling anxious at the prolonged absence of M. de Guersaint. He had expected him at latest at dinner-time, but probably some mischance had detained him at Gavarnie; and he thought how disappointed Marie would be if her father were not there to embrace her the first thing in the morning. With a man like M. de Guersaint, so pleasantly heedless and so hare-brained, everything was possible, every fear might be realised.

Perhaps this anxiety had at first sufficed to keep Pierre awake in spite of his great fatigue; but afterwards the nocturnal noises of the hotel had really assumed unbearable proportions. The morrow, Tuesday, was the day of departure, the last day which the national pilgrimage would spend at Lourdes, and the pilgrims no doubt were making the most of their time, coming from the Grotto and returning thither in the middle of the night, endeavouring as it were to force the grace of Heaven by their commotion, and apparently never feeling the slightest need of repose. The doors slammed, the floors shook, the entire building vibrated beneath the disorderly gallop of a crowd. Never before had the walls reverberated with such obstinate coughs, such thick, husky voices. Thus Pierre, a prey to insomnia, tossed about on his bed and continually rose up, beset with the idea that the noise he heard must have been made by M. de Guersaint who had returned. For some minutes he would listen feverishly; but he could only hear the extraordinary sounds of the passage, amid which he could distinguish nothing precisely. Was it the priest, the mother and her three daughters, or the old married couple on his left, who were fighting with the furniture? or was it rather the larger family, or the single gentleman, or the young single woman on his right, whom some incomprehensible occurrences were leading into adventures? At one moment he jumped from his bed, wishing to explore his absent friend's empty room, as he felt certain that some deeds of violence were taking place in it. But although he listened very attentively when he got there, the only sound he could distinguish was the tender caressing murmur of two voices. Then a sudden recollection of Madame Volmar came to him, and he returned shuddering to bed.

At length, when it was broad daylight and Pierre had just fallen asleep, a loud knocking at his door awoke him with a start. This time there could be no mistake, a loud voice broken by sobs was calling "Monsieur l'Abbe! Monsieur l'Abbe! for Heaven's sake wake up!"

Surely it must be M. de Guersaint who had been brought back dead, at least. Quite scared, Pierre ran and opened the door, in his night-shirt, and found himself in the presence of his neighbour, M. Vigneron.

"Oh! for Heaven's sake, Monsieur l'Abbe, dress yourself at once!" exclaimed the, assistant head-clerk....