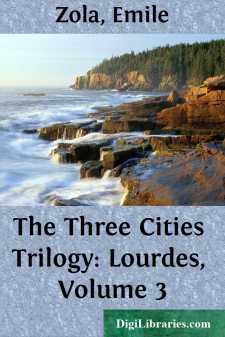 AT seven o'clock on the morning of that fine, bright, warm August Sunday, M. de Guersaint was already up and dressed in one of the two little rooms which he had fortunately been able to secure on the third floor of the Hotel of the Apparitions. He had gone to bed at eleven o'clock the night before and had awoke feeling quite fresh and gay. As soon as he was dressed he entered the adjoining room which Pierre occupied; but the young priest, who had not returned to the hotel until past one in the morning, with his blood heated by insomnia, had been unable to doze off until daybreak and was now still slumbering. His cassock flung across a chair, his other garments scattered here and there, testified to his great weariness and agitation of mind.

Pierre awoke with a start, quite surprised to find himself in that little hotel room into which the sunlight was streaming. All the joyous peals of the bells, the music of the chiming, happy town, moreover, came in through the window which he had left open.

"We shall never have time to get to the hospital before eight o'clock to fetch Marie," resumed M. de Guersaint, "for we must have some breakfast, eh?"

"Of course, make haste and order two cups of chocolate. I will get up at once, I sha'n't be long," replied Pierre.

In spite of the fatigue which had already stiffened his joints, he sprang out of bed as soon as he was alone, and made all haste with his toilet. However, he still had his head in the washing basin, ducking it in the fresh, cool water, when M. de Guersaint, who was unable to remain alone, came back again. "I've given the order," said he; "they will bring it up. Ah! what a curious place this hotel is! You have of course seen the landlord, Master Majeste, clad in white from head to foot and looking so dignified in his office. The place is crammed, it appears; they have never had so many people before. So it is no wonder that there should be such a fearful noise. I was wakened up three times during the night. People kept on talking in the room next to mine. And you, did you sleep well?"

"No, indeed," answered Pierre; "I was tired to death, but I couldn't close my eyes. No doubt it was the uproar you speak of that prevented me."

In his turn he then began to talk of the thin partitions, and the manner in which the house had been crammed with people until it seemed as though the floors and the walls would collapse with the strain. The place had been shaking all night long; every now and then people suddenly rushed along the passages, heavy footfalls resounded, gruff voices ascended nobody knew whence; without speaking of all the moaning and coughing, the frightful coughing which seemed to re-echo from every wall. Throughout the night people evidently came in and went out, got up and lay down again, paying no attention to time in the disorder in which they lived, amid shocks of passion which made them hurry to their devotional exercises as to pleasure parties....