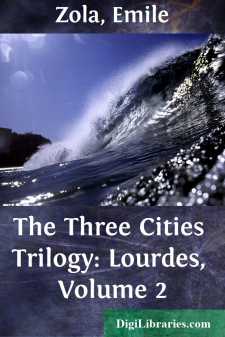 IT was twenty minutes past three by the clock of the Lourdes railway station, the dial of which was illumined by a reflector. Under the slanting roof sheltering the platform, a hundred yards or so in length, some shadowy forms went to and fro, resignedly waiting. Only a red signal light peeped out of the black countryside, far away.

Two of the promenaders suddenly halted. The taller of them, a Father of the Assumption, none other indeed than the Reverend Father Fourcade, director of the national pilgrimage, who had reached Lourdes on the previous day, was a man of sixty, looking superb in his black cloak with its large hood. His fine head, with its clear, domineering eyes and thick grizzly beard, was the head of a general whom an intelligent determination to conquer inflames. In consequence, however, of a sudden attack of gout he slightly dragged one of his legs, and was leaning on the shoulder of his companion, Dr. Bonamy, the practitioner attached to the Miracle Verification Office, a short, thick-set man, with a square-shaped, clean-shaven face, which had dull, blurred eyes and a tranquil cast of features.

Father Fourcade had stopped to question the station-master whom he perceived running out of his office. "Will the white train be very late, monsieur?" he asked.

"No, your reverence. It hasn't lost more than ten minutes; it will be here at the half-hour. It's the Bayonne train which worries me; it ought to have passed through already."

So saying, he ran off to give an order; but soon came back again, his slim, nervous figure displaying marked signs of agitation. He lived, indeed, in a state of high fever throughout the period of the great pilgrimages. Apart from the usual service, he that day expected eighteen trains, containing more than fifteen thousand passengers. The grey and the blue trains which had started from Paris the first had already arrived at the regulation hour. But the delay in the arrival of the white train was very troublesome, the more so as the Bayonne express—which passed over the same rails—had not yet been signalled. It was easy to understand, therefore, what incessant watchfulness was necessary, not a second passing without the entire staff of the station being called upon to exercise its vigilance.

"Yes, in ten minutes, unless I'm obliged to close the line!" cried the station-master as he hastened into the telegraph office.

Father Fourcade and the doctor slowly resumed their promenade. The thing which astonished them was that no serious accident had ever happened in the midst of such a fearful scramble. In past times, especially, the most terrible disorder had prevailed. Father Fourcade complacently recalled the first pilgrimage which he had organised and led, in 1875; the terrible endless journey without pillows or mattresses, the patients exhausted, half dead, with no means of reviving them at hand; and then the arrival at Lourdes, the train evacuated in confusion, no /materiel/ in readiness, no straps, nor stretchers, nor carts....