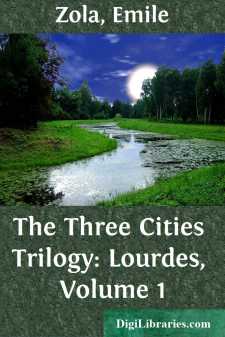 BEFORE perusing this work, it is as well that the reader should understand M. Zola's aim in writing it, and his views—as distinct from those of his characters—upon Lourdes, its Grotto, and its cures. A short time before the book appeared M. Zola was interviewed upon the subject by his friend and biographer, Mr. Robert H. Sherard, to whom he spoke as follows:

"'Lourdes' came to be written by mere accident. In 1891 I happened to be travelling for my pleasure, with my wife, in the Basque country and by the Pyrenees, and being in the neighbourhood of Lourdes, included it in my tour. I spent fifteen days there, and was greatly struck by what I saw, and it then occurred to me that there was material here for just the sort of novel that I like to write—a novel in which great masses of men can be shown in motion—/un grand mouvement de foule/—a novel the subject of which stirred up my philosophical ideas.

"It was too late then to study the question, for I had visited Lourdes late in September, and so had missed seeing the best pilgrimage, which takes place in August, under the direction of the Peres de la Misericorde, of the Rue de l'Assomption in Paris—the National Pilgrimage, as it is called. These Fathers are very active, enterprising men, and have made a great success of this annual national pilgrimage. Under their direction thirty thousand pilgrims are transported to Lourdes, including over a thousand sick persons.

"So in the following year I went in August, and saw a national pilgrimage, and followed it during the three days which it lasts, in addition to the two days given to travelling. After its departure, I stayed on ten or twelve days, working up the subject in every detail. My book is the story of such a national pilgrimage, and is, accordingly, the story of five days. It is divided into five parts, each of which parts is limited to one day.

"There are from ninety to one hundred characters in the story: sick persons, pilgrims, priests, nuns, hospitallers, nurses, and peasants; and the book shows Lourdes under every aspect. There are the piscinas, the processions, the Grotto, the churches at night, the people in the streets. It is, in one word, Lourdes in its entirety. In this canvas is worked out a very delicate central intrigue, as in 'Dr. Pascal,' and around this are many little stories or subsidiary plots. There is the story of the sick person who gets well, of the sick person who is not cured, and so on. The philosophical idea which pervades the whole book is the idea of human suffering, the exhibition of the desperate and despairing sufferers who, abandoned by science and by man, address themselves to a higher Power in the hope of relief; as where parents have a dearly loved daughter dying of consumption, who has been given up, and for whom nothing remains but death. A sudden hope, however, breaks in upon them: 'supposing that after all there should be a Power greater than that of man, higher than that of science.' They will haste to try this last chance of safety....