The Three Additions to Daniel, a Study 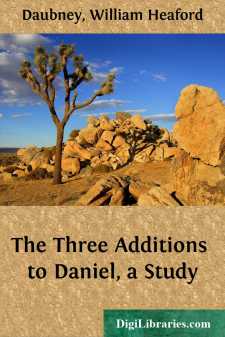 These Additions differ from the other Apocryphal books, except the "rest of" Esther, in not claiming to be separate works, but appearing as supplements to a canonical book. The Song of the Three Children takes its assumed place between vv. 23 and 24 of Dan. iii.; the History of Susanna in the language of the A.V. is "set apart from the beginning of Daniel"; and Bel and the Dragon is "cut off from the end of" the same book. The first of these additions alone has an organic connection with the main narrative; the other two are independent scenes from the life, or what purports to be the life, of Daniel—episodes, one in his earlier, one in his later, career. In the Song, Daniel personally does not appear at all; in Susanna and in Bel he plays a conspicuous part; in Susanna appearing as a sort of 'deus ex machina' to set things right at the end; and in Bel he is an essential actor in the whole story.

It is hoped to shew, amongst other things, that the dissimilarity supposed to exist between these additions and the rest of Daniel is by no means so great as has sometimes been imagined. The opinion of one of the latest commentators on Daniel (Marti, Tübingen, 1901, p. xx) may be taken as a fair sample of this view. He thinks these pieces by no means congruous with the canonical Daniel: "Den Abstand dieser apokryphischen Erzählungen von dem in hebraram. Dan. aufgenommen Volkstradition kann niemand verkennen." So far as these additions to the contents of Daniel are concerned, he would agree with the exaggerated statement of Trommius as to all the Apocrypha: "ad libros canonicos S. Scripturæ proprie non pertinent nec cum Græca eorum versione quicquam commune habent," etc. (Concord. Præf. § xi.). The sharp distinction drawn by J.M. Fuller also between the style and thought of these additions, and of the canonical Daniel, is far too strong: "as clearly marked as between the canonical and apocryphal gospels." Few will think the separation between them so wide as this (Speaker's Comm. Introd. to Dan. p. 221a). Moreover, they are much less obviously incongruous, less plainly meant for edifying "improvements" by a later hand, than the Additions to Esther.

But beyond the connection, more or less strong, which these pieces have with the canonical book, they have also a connection, by means of certain similar features, with one another. All have this in common, viz. the celebration or record of some deliverance. God's persecuted people are rescued from mortal danger. In the first and third cases they suffer at the hands of idolaters; in the second, of Jewish co-religionists. In each case they provide us with a scene from Israelitish life "in a strange land." They are tales of the Babylonian Captivity.

In each story the ministry of angels, giving aid against visible foes, takes a prominent place; though in Susanna these appearances are suppressed in Theodotion's version, an angel, however, being just mentioned in Daniel's sentences of condemnation. In each case too there is distinct progress under God's guiding hand; things are left much better at the end than at the beginning....