The Thread of Gold 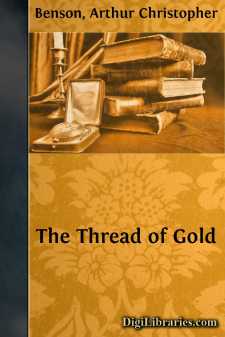 I sate to-day, in a pleasant hour, at a place called The Seven Springs, high up in a green valley of the Cotswold hills. Close beside the road, seven clear rills ripple out into a small pool, and the air is musical with the sound of running water. Above me, in a little thicket, a full-fed thrush sent out one long-drawn cadence after another, in the joy of his heart, while the lengthening shadows of bush and tree crept softly over the pale sward of the old pasture-lands, in the westering light of the calm afternoon.

These springs are the highest head-waters of the Thames, and that fact is stated in a somewhat stilted Latin hexameter carved on a stone of the wall beside the pool. The so-called Thames-head is in a meadow down below Cirencester, where a deliberate engine pumps up, from a hidden well, thousands of gallons a day of the purest water, which begins the service of man at once by helping to swell the scanty flow of the Thames and Severn Canal. But The Seven Springs are the highest hill-fount of Father Thames for all that, streaming as they do from the eastward ridge of the great oolite crest of the downs that overhang Cheltenham. As soon as those rills are big enough to form a stream, the gathering of waters is known as the Churn, which, speeding down by Rendcomb with its ancient oaks, and Cerney, in a green elbow of the valley, join the Thames at Cricklade.

It was of the essence of poetry to feel that the water-drops which thus babbled out at my feet in the spring sunshine would be moving, how many days hence, beside the green playing-fields at Eton, scattered, diminished, travel-worn, polluted; but still, under night and stars, through the sunny river-reaches, through hamlet and city, by water-meadow or wharf, the same and no other. And half in fancy, half in earnest, I bound upon the heedless waters a little message of love for the fields and trees so dear to me.

What a strange parable it all made! the sparkling drops so soon lost to sight and thought alike, each with its own definite place in the limitless mind of God, all numbered, none forgotten; each drop,—bright, new-born, and fresh as it appeared, racing out so light-heartedly into the sun,—yet as old, and older, than the rocks from which it sprang! How often had those water-drops been woven into cloud-wreaths, through what centuries they had leapt and plunged among sea-billows, or lain cold and dark in the ocean depths, since the day when this mass of matter that we call the earth had been cut off and sent whirling into space, a molten drop from the fierce vortex of its central sun! And, what is the strangest thought of all, I can sit here myself, a tiny atom spun from drift of storms, and concourse of frail dust, and, however dimly and faintly, depict the course of things, trace, through some subtle faculty, the movement of the mind of God through the aeons; and yet, though I can send my mind into the past and the future, though I can see the things that are not and the things that are, I am denied the least inkling of what it all signifies, what the slow movement of the ages is all aimed at, and even what the swift interchange of light and darkness, pain and pleasure, sickness and health, love and hate, is meant to mean to me—whether there is a purpose and an end at all, or whether I am just allowed, for my short space of days, to sit, a bewildered spectator, at some vast and unintelligible drama....