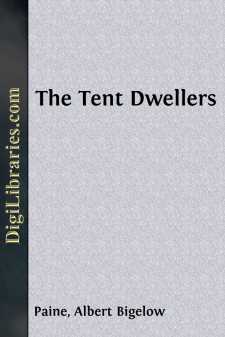 It was during the holiday week that Eddie proposed the matter. That is Eddie's way. No date, for him, is too far ahead to begin to plan anything that has vari-colored flies in it, and tents, and the prospect of the campfire smell. The very mention of these things will make his hair bristle up (rather straight, still hair it is and silvered over with premature wisdom) and put a new glare into his spectacles (rather wide, round spectacles they are) until he looks even more like an anarchist than usual—more indeed than in the old Heidelberg days, when, as a matter of truth, he is a gentle soul; sometimes, when he has transgressed, or thinks he has, almost humble.

As I was saying, it was during the holidays—about the end of the week, as I remember it—and I was writing some letters at the club in the little raised corner that looks out on the park, when I happened to glance down toward the fireplace, and saw Eddie sitting as nearly on his coat collar as possible, in one of the wide chairs, and as nearly in the open hickory fire as he could get, pawing over a book of Silver Doctors, Brown Hackles and the like, and dreaming a long, long dream.

Now, I confess there is something about a book of trout flies, even at the year's end, when all the brooks are flint and gorged with white, when all the north country hides under seamless raiment that stretches even to the Pole itself—even at such a time, I say, there is something about those bits of gimp, and gut, and feathers, and steel, that prick up the red blood of any man—or of any woman, for that matter—who has ever flung one of those gaudy things into a swirl of dark water, and felt the swift, savage tug on the line and heard the music of the singing reel.

I forgot that I was writing letters and went over there.

Then he unfolded to me a marvelous plan. It was a place in Nova Scotia—he had been there once before, only, this time he was going a different route, farther into the wilderness, the deep unknown, somewhere even the guides had never been. Perhaps stray logmen had been there, or the Indians; sportsmen never. There had been no complete surveys, even by the government. Certain rivers were known by their outlets, certain lakes by name. It was likely that they formed the usual network and that the circuit could be made by water, with occasional carries. Unquestionably the waters swarmed with trout. A certain imaginative Indian, supposed to have penetrated the unknown, had declared that at one place were trout the size of one's leg.

Eddie became excited as he talked and his hair bristled. He set down a list of the waters so far as known, the names of certain guides, a number of articles of provision and an array of camp paraphernalia. Finally he made maps and other drawings and began to add figures. It was dusk when we got back. The lights were winking along the park over the way, and somewhere through the night, across a waste of cold, lay the land we had visited, still waiting to be explored....