by George A. Aitken 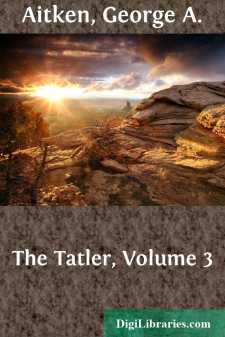 After having long celebrated the superior graces and excellences among men, in an imaginary character, I do myself the honour to show my veneration for transcendent merit, under my own name, in this address to your lordship. The just application of those high accomplishments of which you are master, has been an advantage to all your fellow subjects; and it is from the common obligation you have laid upon all the world, that I, though a private man, can pretend to be affected with, or take the liberty to acknowledge your great talents and public virtues.

It gives a pleasing prospect to your friends, that is to say, to the friends of your country, that you have passed through the highest offices, at an age when others usually do but form to themselves the hopes of them. They may expect to see you in the House of Lords as many years as you were ascending to it. It is our common good, that your admirable eloquence can now no longer be employed but in the expression of your own sentiments and judgment. The skilful pleader is now for ever changed into the just judge; which latter character your lordship exerts with so prevailing an impartiality, that you win the approbation even of those who dissent from you, and you always obtain favour, because you are never moved by it.

This gives you a certain dignity peculiar to your present situation, and makes the equity, even of a Lord High Chancellor, appear but a degree towards the magnanimity of a peer of Great Britain.

Forgive me, my lord, when I cannot conceal from you, that I shall never hereafter behold you, but I shall behold you, as lately, defending the brave, and the unfortunate.

When we attend to your lordship, engaged in a discourse, we cannot but reflect upon the many requisites which the vainglorious speakers of antiquity have demanded in a man who is to excel in oratory; I say, my lord, when we reflect upon the precepts by viewing the example, though there is no excellence proposed by those rhetoricians wanting, the whole art seems to be resolved into that one motive of speaking, sincerity in the intention. The graceful manner, the apt gesture, and the assumed concern, are impotent helps to persuasion, in comparison of the honest countenance of him who utters what he really means. From hence it is, that all the beauties which others attain with labour, are in your lordship but the natural effects of the heart that dictates.

It is this noble simplicity which makes you surpass mankind in the faculties wherein mankind are distinguished from other creatures, reason and speech.

If these gifts were communicated to all men in proportion to the truth and ardour of their hearts, I should speak of you with the same force as you express yourself on any other subject. But I resist my present impulse, as agreeable as it is to me; though indeed, had I any pretensions to a fame of this kind, I should, above all other themes, attempt a panegyric upon my Lord Cowper: for the only sure way to a reputation for eloquence, in an age wherein that perfect orator lives, is to choose an argument, upon which he himself must of necessity be silent....