The Task and Other Poems 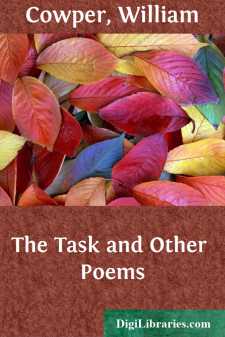 After the publication of his "Table Talk" and other poems in March, 1782, William Cowper, in his quiet retirement at Olney, under Mrs. Unwin's care, found a new friend in Lady Austen. She was a baronet's widow who had a sister married to a clergyman near Olney, with whom Cowper was slightly acquainted. In the summer of 1781, when his first volume was being printed, Cowper met Lady Austen and her sister in the street at Olney, and persuaded Mrs. Unwin to invite them to tea. Their coming was the beginning of a cordial friendship. Lady Austen, without being less earnest, had a liveliness that satisfied Cowper's sense of fun to an extent that stirred at last some jealousy in Mrs. Unwin. "She had lived much in France," Cowper said, "was very sensible, and had infinite vivacity."

The Vicar of Olney was in difficulties, with his affairs in the hands of trustees. The duties of his office were entirely discharged by a curate, and the vicarage was to let. Lady Austen, in 1782, rented it, to be near her new friends. There was only a wall between the garden of the house occupied by Cowper and Mrs. Unwin and the vicarage garden. A door was made in the wall, and there was a close companionship of three. When Lady Austen did not spend her evenings with Mrs. Unwin and Cowper, Mrs. Unwin and Cowper spent their evenings with Lady Austen. They read, talked, Lady Austen played and sang, and they all called one another by their Christian names, William, Mary (Mrs. Unwin), and Anna (Lady Austen). In a poetical epistle to Lady Austen, written in December, 1781, Cowper closes a reference to the strength of their friendship with the evidence it gave,—

"That Solomon has wisely spoken,—     'A threefold cord is not soon broken.'"

One evening in the summer of 1782, when Cowper was low-spirited, Lady Austen told him in lively fashion the story upon which he founded the ballad of "John Gilpin." Its original hero is said to have been a Mr. Bayer, who had a draper's shop in London, at the corner of Cheapside. Cowper was so much tickled by it, that he lay awake part of the night rhyming and laughing, and by the next evening the ballad was complete. It was sent to Mrs. Unwin's son, who sent it to the Public Advertiser, where for the next two or three years it lay buried in the "Poets' Corner," and attracted no particular attention.

In the summer of 1783, when one of the three friends had been reading blank verse aloud to the other two, Lady Austen, from her seat upon the sofa, urged upon Cowper, as she had urged before, that blank verse was to be preferred to the rhymed couplets in which his first book had been written, and that he should write a poem in blank verse. "I will," he said, "if you will give me a subject." "Oh," she answered, "you can write upon anything. Write on this sofa." He playfully accepted that as "the task" set him, and began his poem called "The Task," which was finished in the summer of the next year, 1784. But before "The Task" was finished, Mrs....