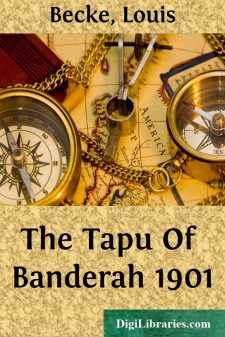 As the rising sun had just begun to pierce the misty tropic haze of early dawn, a small, white-painted schooner of ninety or a hundred tons burden was bearing down upon the low, densely-wooded island of Mayou, which lies between the coast of south-east New Guinea and the murderous Solomon Group—the grave of the white man in Melanesia.

The white population of Mayou was not large, for it consisted only of an English missionary and his wife—who was, of course, a white woman—a German trader named Peter Schwartzkoff and his native wife; an English trader named Charlie Blount, with his two half-caste sons and daughters; and an American trader and ex-whaler, named Nathaniel Burrowes, with his wives.

Although the island is of large extent, and of amazing fertility, the native population was at this time comparatively small, numbering only some three thousand souls. They nearly all lived at the south-west end of the island, the rendezvous of the few trading ships that visited the place. Occasionally a surveying vessel, and, at longer intervals still, a labour-recruiting ship from Hawaii or Fiji, would call. At such times the monotony of the lives of the white residents of Mayou was pleasantly broken. Once a year, too, a missionary vessel would drop anchor in the little reef-bound port, but her visit was of moment only to the Rev. Mr. Deighton, his wife, and their native converts, and the mission ship's presence in the harbour was taken no notice of by the three white traders; for a missionary ship is not always regarded by the average trader in the South Seas as a welcome visitor.

Almost with the rising of the sun the vessel had been sighted from the shore by a party of natives, who were fishing off the south end of the island, and in a few minutes their loud cries reached other natives on shore, and by them was passed on from house to house along the beach till it reached the town itself. From there, presently, came a deep sonorous shout, "Evaka! Evaka!" ("A ship! A ship!"), and then they swarmed out of their thatched dwellings like bees from a hive and ran, laughing and shouting together, down to the beach in front of the village.

As the clamour increased, the Rev. Wilfrid Deighton opened the door of his study and stepped out upon the shady verandah of the mission house, which stood upon a gentle, palm-covered rise about five hundred yards from the thickly clustering houses of the native village. He was a tall, thin man with a scanty brown beard, and his face wore a wearied, anxious expression. His long, lean body, coarse, toil-worn hands, and shabby clothing indicated, too, that the lines of the Rev. Wilfrid had not been cast in a pleasant place when he chose the wild, unhealthy island of Mayou as the field of his labours. But if he showed bodily traces of the hard, continuous toil he had undergone during the seven years' residence among the people of Mayou, his eye was still full of the fire of that noble missionary spirit which animated the souls of such earnest men as Moffat and Livingstone, and Williams of Erromanga, and Gordon of Khartoum....