The Tale of a Trooper 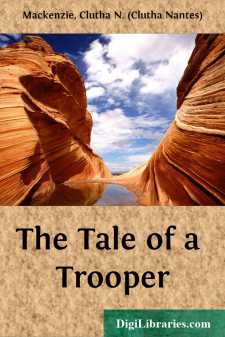 CHAPTER I MAC BECOMES A TROOPER

A winter storm raged across the ridges and tore in violent gusts down the gullies, carrying great squalls of fleecy snow. The wind swept the flakes horizontally through the gap where the station track ran an irregular course through the bush; and, though but a short hour had passed since the ominous mass of black cloud had swept over the early morning sky, the ground was already thickly powdered.

A ramshackle hut stood beside the track where it entered the bush, and in a rough lean-to, where firewood, tools and saddlery were piled more or less indiscriminately, two unkempt station ponies, saddled and bridled, stood in somnolent attitudes. Huddled hens sheltered from the searching blasts, which swept in eddies of snow, ruffling the feathers of the hens and driving the tails of the horses between their legs.

Charley and Mac had come thus far on their way out to have a look at the stock in the big paddocks higher in the hills, before the thickening snow had made purposeless their going further. So they had dropped in to see old George, the rouseabout, and have a yarn with him, or, if there were no signs of the weather clearing, to consider the question of work in the wool-shed.

"Hullo, boys!" mumbled George. "I reckon as thar' ain't no use us gittin' art jist now. I thinks the fire's the best place ter day. Squat yerself in that thar cheer, Mac, me boy. Jinny! get some tea," he roared hospitably through the wall towards the wee kitchen where his hard-working little wife was making bread for her large family of children who were away at school. "And I'll give yer a toon on the grammephone."

Nothing averse, the two stockmen settled down before the big log fire in George's den, aromatically smoky from firewood and tobacco, with its walls papered from odd paperhangers' samples and prints from Victorian journals, and with domestic odds and ends lying here and there. The good lady speedily produced the tea and added cakes and scones, while George brought into action his cheap American machine and its hoary old records; vague, scratching echoes here in the depths of the bush of the gay sparkling life of Piccadilly and Leicester Square by night, laughing theatre crowds and wonderful women—a life worlds away from George and his rough, but hospitable hearth. He laughed where sometimes there were jokes, more frequently where there were not, and the other two laughed good-naturedly in concert, for the machine scratched so badly that they could not distinguish a word, though George, remembering them in the freshness of their youth, was blind to their growing infirmities. If the two laughed heartily, or expressed in words the good qualities of a record, those, in addition to George's particular cronies, were given a second or a third run.

They grew rather tired of this entertainment, and turned their attention to the domestic bookshelf and the family treasures which adorned the walls and the mantelpiece. In a glass frame was an army biscuit of army hardness on which Mrs....