The Tables Turned or, Nupkins Awakened. A Socialist Interlude 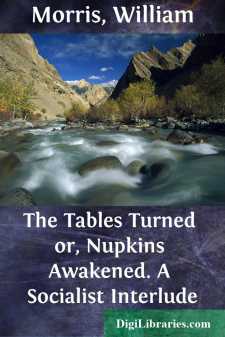 Usher, Clerk of the Court, Mr. Hungary, Q.C., and others.  Mr. La-di-da, the prisoner, not in the dock, but seated in a chair before it.  [Enter Mr. Justice Nupkins.

Mr. Justice Nupkins.  Prisoner at the bar, you have been found guilty by a jury, after a very long and careful consideration of your remarkable and strange case, of a very serious offence; an offence which squeamish moralists are apt to call robbing the widow and orphan; a cant phrase also, with which I hesitate to soil my lips, designates this offence as swindling.  You will permit me to remark that the very fact that such nauseous and improper words can be used about the conduct of a gentleman shows how far you have been led astray from the path traced out for the feet of a respectable member of society.  Mr. La-di-da, if you were less self-restrained, less respectful, less refined, less of a gentleman, in short, I might point out to you with more or less severity the disastrous consequences of your conduct; but I cannot doubt, from the manner in which you have borne yourself during the whole of this trial, that you are fully impressed with the seriousness of the occasion.  I shall say no more then, but perform the painful duty which devolves on me of passing sentence on you.  I am compelled in doing so to award you a term of imprisonment; but I shall take care that you shall not be degraded by contamination with thieves and rioters, and other coarse persons, or share the diet and treatment which is no punishment to persons used to hard living: that would be to inflict a punishment on you not intended by the law, and would cast a stain on your character not easily wiped away.  I wish you to return to that society of which you have up to this untoward event formed an ornament without any such stain.  You will, therefore, be imprisoned as a first-class misdemeanant for the space of one calendar month; and I trust that during the retirement thus enforced upon you, which to a person of your resources should not be very irksome, you will reflect on the rashness, the incaution, the impropriety, in one word, of your conduct, and that you will never be discovered again appropriating to your personal use money which has been entrusted to your care by your friends and relatives.

Mr. La-di-da.  I thank you, my lord, for your kindness and consideration.  May I be allowed to ask you to add to your kindness by permitting me to return to my home and make some necessary arrangements before submitting myself to the well-merited chastisement which my imprudence has brought upon me?

Mr. J. N.  Certainly.  I repeat I do not wish to make your sentence any heavier by forcing a hard construction upon it.  I give you a week to make all arrangements necessary for your peace of mind and your bodily comfort.

[The case of Mary Pinch called.]

Mr. Hungary, Q.C.  I am for the prosecution, my lord, instructed by the Secretary of State for the Home Department.  (Judge bites his pen and nods.)  My lord, and gentlemen of the Jury, although this case may seem to some ill-judging persons a trivial one, I think you will be able to see before it is over that it is really important in its bearing on the welfare of society, the welfare of the public; that is, of the respectable public,—of the respectable public, gentlemen.  For in these days, when the spirit of discontent is so widespread, all illegal actions have, so to say, a political bearing, my lord, and all illegal actions are wicked, gentlemen of the Jury, since they tend towards the insecurity of society, or in other words, are definitely aimed at the very basis of all morality and religion.  Therefore, my lord, I have received instructions from the Home Secretary to prosecute this woman, who, as I shall be able to prove to you, gentlemen of the Jury, by the testimony of three witnesses occupying responsible official positions, has been guilty of a breach at once of the laws of the country and the dictates of morality, and has thereby seriously inconvenienced a very respectable tradesman, nay (looking at his brief) three respectable tradesmen.  I shall be able to show, gentlemen, that this woman has stolen three loaves of bread: (impressively) not one, gentlemen, but three.

A Voice.  She’s got three children, you palavering blackguard!

Mr. Justice N. (who has made an elaborate show of composing himself to slumber since the counsel began, here wakes up and cries out) Arrest that man, officer; I will commit him, and give him the heaviest punishment that the law allows of....