The Swoop! or How Clarence Saved England A Tale of the Great Invasion 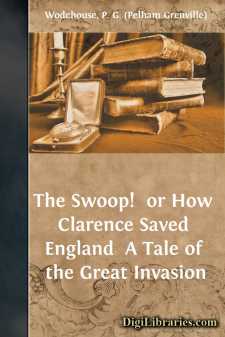 Clarence Chugwater looked around him with a frown, and gritted his teeth.

Clarence was a sturdy lad of some fourteen summers. He was neatly, but not gaudily, dressed in a flat-brimmed hat, a coloured handkerchief, a flannel shirt, a bunch of ribbons, a haversack, football shorts, brown boots, a whistle, and a hockey-stick. He was, in fact, one of General Baden-Powell's Boy Scouts.

Scan him closely. Do not dismiss him with a passing glance; for you are looking at the Boy of Destiny, at Clarence MacAndrew Chugwater, who saved England.

To-day those features are familiar to all. Everyone has seen the Chugwater Column in Aldwych, the equestrian statue in Chugwater Road (formerly Piccadilly), and the picture-postcards in the stationers' windows. That bulging forehead, distended with useful information; that massive chin; those eyes, gleaming behind their spectacles; that tout ensemble; that je ne sais quoi.

In a word, Clarence!

He could do everything that the Boy Scout must learn to do. He could low like a bull. He could gurgle like a wood-pigeon. He could imitate the cry of the turnip in order to deceive rabbits. He could smile and whistle simultaneously in accordance with Rule 8 (and only those who have tried this know how difficult it is). He could spoor, fell trees, tell the character from the boot-sole, and fling the squaler. He did all these things well, but what he was really best at was flinging the squaler.

Clarence, on this sultry August afternoon, was tensely occupied tracking the family cat across the dining-room carpet by its foot-prints. Glancing up for a moment, he caught sight of the other members of the family.

"England, my England!" he moaned.

It was indeed a sight to extract tears of blood from any Boy Scout. The table had been moved back against the wall, and in the cleared space Mr. Chugwater, whose duty it was to have set an example to his children, was playing diabolo. Beside him, engrossed in cup-and-ball, was his wife. Reggie Chugwater, the eldest son, the heir, the hope of the house, was reading the cricket news in an early edition of the evening paper. Horace, his brother, was playing pop-in-taw with his sister Grace and Grace's fiance, Ralph Peabody. Alice, the other Miss Chugwater, was mending a Badminton racquet.

Not a single member of that family was practising with the rifle, or drilling, or learning to make bandages.

"If you can't play without snorting like that, my boy," said Mr. Chugwater, a little irritably, "you must find some other game. You made me jump just as I was going to beat my record."

"Talking of records," said Reggie, "Fry's on his way to his eighth successive century. If he goes on like this, Lancashire will win the championship."

"I thought he was playing for Somerset," said Horace.

"That was a fortnight ago. You ought to keep up to date in an important subject like cricket."