The Survivors of the Chancellor, diary of J.R. Kazallon, passenger 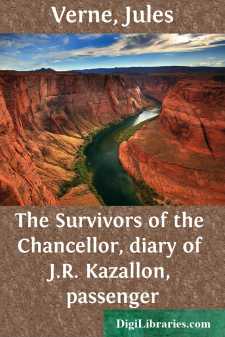 CHARLESTON, SEPTEMBER 27th, 1869.—It is high tide, and three o'clock in the afternoon when we leave the Battery-quay; the ebb carries us off shore, and as Captain Huntly has hoisted both main and top sails, the northerly breeze drives the "Chancellor" briskly across the bay. Fort Sumter ere long is doubled, the sweeping batteries of the mainland on our left are soon passed, and by four o'clock the rapid current of the ebbing tide has carried us through the harbour-mouth.

But as yet we have not reached the open sea; we have still to thread our way through the narrow channels which the surge has hollowed out amongst the sand-banks. The captain takes a south-west course, rounding the lighthouse at the corner of the fort; the sails are closely trimmed; the last sandy point is safely coasted, and at length, at seven o'clock in the evening; we are out free upon the wide Atlantic.

The "Chancellor" is a fine square-rigged three-master, of 900 tons burden, and belongs to the wealthy Liverpool firm of Laird Brothers. She is two years old, is sheathed and secured with copper, her decks being of teak, and the base of all her masts, except the mizzen, with all their fittings, being of iron. She is registered first class A I, and is now on her third voyage between Charleston and Liverpool. As she wended her way through the channels of Charleston harbour, it was the British flag that was lowered from her mast-head; but without colours at all, no sailor could have hesitated for a moment in telling her nationality,—for English she was, and nothing but English from her water-line upwards to the truck of her masts.

I must now relate how it happens that I have taken my passage on board the "Chancellor" on her return voyage to England. At present there is no direct steamship service between South Carolina and Great Britain, and all who wish to cross must go either northwards to New York or southwards to New Orleans. It is quite true that if I had chosen to start from New York I might have found plenty of vessels belonging to English, French, or Hamburg lines, any of which would have conveyed me by a rapid voyage to my destination; and it is equally true that if I had selected New Orleans for my embarkation I could readily have reached Europe by one of the vessels of the National Steam Navigation Company, which join the French Transatlantic line of Colon and Aspinwall. But it was fated to be otherwise.

One day, as I was loitering about the Charleston quays, my eye lighted upon this vessel. There was something about the "Chancellor" that pleased me, and a kind of involuntary impulse took me on board, where I found the internal arrangements perfectly comfortable. Yielding to the idea that a voyage in a sailing vessel had certain charms beyond the transit in a steamer, and reckoning that with wind and wave in my favour there would be little material difference in time; considering, moreover, that in these low latitudes the weather in early autumn is fine and unbroken, I came to my decision, and proceeded forthwith to secure my passage by this route to Europe....