The Student's Life of Washington; Condensed from the Larger Work of Washington Irving For Young Persons and for the Use of Schools 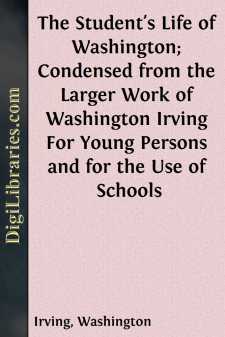 CHAPTER I. BIRTH OF WASHINGTON.—HIS BOYHOOD.

The Washington family is of an ancient English stock, the genealogy of which has been traced up to the century immediately succeeding the Conquest. Among the knights and barons who served under the Count Palatine, Bishop of Durham, to whom William the Conqueror had granted that important See, was WILLIAM DE HERTBURN. At that period surnames were commonly derived from castles or estates; and de Hertburn, in 1183, in exchanging the village of Hertburn for the manor of Wessyngton, assumed the name of DE WESSYNGTON. From this period the family has been traced through successive generations, until the name, first dropping the de, varied from Wessyngton to Wassington, Wasshington, and finally to Washington. The head of the family to which our Washington immediately belongs sprang from Lawrence Washington, Esq., of Gray's Inn. He was mayor of Northampton, and received a grant of the manor of Sulgrave from Henry VIII. [Sir William Washington of Packington, was his direct descendant. The Washingtons were attached to the Stuart dynasty. Lieut.-Col. James Washington perished in defence of that cause. Sir Henry Washington, son of Sir William, distinguished himself under Prince Rupert, in 1643, at the storming of Bristol; and still more, in 1646, in the defence of Worcester against the arms of Fairfax. We hear little of the Washingtons after the death of Charles I. England, during the protectorate, was an uncomfortable residence for those who had adhered to the Stuarts, and many sought refuge in other lands. Among many who emigrated to the western wilds were John and Andrew Washington, great-grandsons of the grantee of Sulgrave.]

The brothers arrived in Virginia in 1657, and purchased lands in Westmoreland County, on the northern neck, between the Potomac and Rappahannock rivers. John married a Miss Anna Pope, of the same county, and took up his residence on Bridges Creek, near where it falls into the Potomac. He became an extensive planter, and, in process of time, a magistrate and member of the House of Burgesses. Having a spark of the old military fire of the family, we find him, as Colonel Washington, leading the Virginia forces, in co-operation with those of Maryland, against a band of Seneca Indians, who were ravaging the settlements along the Potomac.

The estate continued in the family. His grandson Augustine, the father of our Washington, was born there in 1694. He was twice married; first (April 20th, 1715), to Jane, daughter of Caleb Butler, Esq., of Westmoreland County, by whom he had four children, of whom only two, Lawrence and Augustine, survived the years of childhood; their mother died November 24th, 1728, and was buried in the family vault. On the 6th of March, 1730, he married in second nuptials, Mary, the daughter of Colonel Ball, a young and beautiful girl, said to be the belle of the northern neck. By her he had four sons, George, Samuel, John Augustine, and Charles; and two daughters, Elizabeth, or Betty, as she was commonly called, and Mildred, who died in infancy....