The Struggles of Brown, Jones, and Robinson By One of the Firm 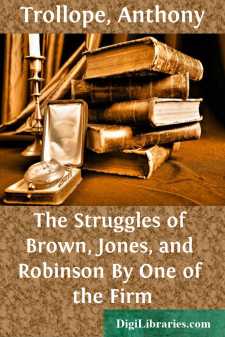 PREFACE. BY ONE OF THE FIRM.

It will be observed by the literary and commercial world that, in this transaction, the name of the really responsible party does not show on the title-page. I—George Robinson—am that party. When our Mr. Jones objected to the publication of these memoirs unless they appeared as coming from the firm itself, I at once gave way. I had no wish to offend the firm, and, perhaps, encounter a lawsuit for the empty honour of seeing my name advertised as that of an author. We had talked the matter over with our Mr. Brown, who, however, was at that time in affliction, and not able to offer much that was available. One thing he did say; "As we are partners," said Mr. Brown, "let's be partners to the end." "Well," said I, "if you say so, Mr. Brown, so it shall be." I never supposed that Mr. Brown would set the Thames on fire, and soon learnt that he was not the man to amass a fortune by British commerce. He was not made for the guild of Merchant Princes. But he was the senior member of our firm, and I always respected the old-fashioned doctrine of capital in the person of our Mr. Brown.

When Mr. Brown said, "Let's be partners to the end; it won't be for long, Mr. Robinson," I never said another word. "No," said I, "Mr. Brown; you're not what you was—and you're down a peg; I'm not the man to take advantage and go against your last wishes. Whether for long or whether for short, we'll pull through in the same boat to the end. It shall be put on the title-page—'By One of the Firm.'" "God bless you, Mr. Robinson," said he; "God bless you."

And then Mr. Jones started another objection. The reader will soon realize that anything I do is sure to be wrong with Mr. Jones. It wouldn't be him else. He next declares that I can't write English, and that the book must be corrected, and put out by an editor? Now, when I inform the discerning British Public that every advertisement that has been posted by Brown, Jones, and Robinson, during the last three years has come from my own unaided pen, I think few will doubt my capacity to write the "Memoirs of Brown, Jones, and Robinson," without any editor whatsoever.

On this head I was determined to be firm. What! after preparing, and correcting, and publishing such thousands of advertisements in prose and verse and in every form of which the language is susceptible, to be told that I couldn't write English! It was Jones all over. If there is a party envious of the genius of another party in this sublunary world that party is our Mr. Jones.

But I was again softened by a touching appeal from our senior partner. Mr. Brown, though prosaic enough in his general ideas, was still sometimes given to the Muses; and now, with a melancholy and tender cadence, he quoted the following lines;—

"Let dogs delight to bark and bite, For 'tis their nature to. But 'tis a shameful sight to see, when partners of one firm like we, Fall out, and chide, and fight!"

So I gave in again.

It was then arranged that one of Smith and Elder's young men should look through the manuscript, and make any few alterations which the taste of the public might require....