The Street of Seven Stars 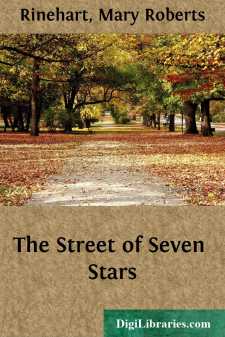 The old stucco house sat back in a garden, or what must once have been a garden, when that part of the Austrian city had been a royal game preserve. Tradition had it that the Empress Maria Theresa had used the building as a hunting-lodge, and undoubtedly there was something royal in the proportions of the salon. With all the candles lighted in the great glass chandelier, and no sidelights, so that the broken paneling was mercifully obscured by gloom, it was easy to believe that the great empress herself had sat in one of the tall old chairs and listened to anecdotes of questionable character; even, if tradition may be believed, related not a few herself.

The chandelier was not lighted on this rainy November night. Outside in the garden the trees creaked and bent before the wind, and the heavy barred gate, left open by the last comer, a piano student named Scatchett and dubbed "Scatch"—the gate slammed to and fro monotonously, giving now and then just enough pause for a hope that it had latched itself, a hope that was always destroyed by the next gust.

One candle burned in the salon. Originally lighted for the purpose of enabling Miss Scatchett to locate the score of a Tschaikowsky concerto, it had been moved to the small center table, and had served to give light if not festivity to the afternoon coffee and cakes. It still burned, a gnarled and stubby fragment, in its china holder; round it the disorder of the recent refreshment, three empty cups, a half of a small cake, a crumpled napkin or two,—there were never enough to go round,—and on the floor the score of the concerto, clearly abandoned for the things of the flesh.

The room was cold. The long casement windows creaked in time with the slamming of the gate and the candle flickered in response to a draft under the doors. The concerto flapped and slid along the uneven old floor. At the sound a girl in a black dress, who had been huddled near the tile stove, rose impatiently and picked it up. There was no impatience, however, in the way she handled the loose sheets. She put them together carefully, almost tenderly, and placed them on the top of the grand piano, anchoring them against the draft with a china dog from the stand.

The room was very bare—a long mirror between two of the windows, half a dozen chairs, a stand or two, and in a corner the grand piano. There were no rugs—the bare floor stretched bleakly into dim corners and was lost. The crystal pendants of the great chandelier looked like stalactites in a cave. The girl touched the piano keys; they were ice under her fingers.

In a sort of desperation she drew a chair underneath the chandelier, and armed with a handful of matches proceeded to the unheard-of extravagance of lighting it, not here and there, but throughout as high as she could reach, standing perilously on her tiptoes on the chair.

The resulting illumination revealed a number of things: It showed that the girl was young and comely and that she had been crying; it revealed the fact that the coal-pail was empty and the stove almost so; it let the initiated into the secret that the blackish fluid in the cups had been made with coffee extract that had been made of Heaven knows what; and it revealed in the cavernous corner near the door a number of trunks....