The Stranger A Drama, in Five Acts 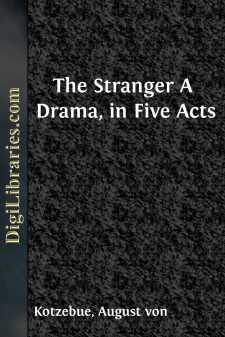 There seems to be required by a number of well meaning persons of the present day a degree of moral perfection in a play, which few literary works attain; and in which sermons, and other holy productions, are at times deficient, though written with the purest intention.

To criticise any book, besides the present drama, was certainly not a premeditated design in writing this little essay; but in support of the position—that every literary work, however guided by truth, may occasionally swerve into error, it may here be stated that the meek spirit of christianity can seldom be traced in any of those pious writings where our ancient religion, the church of Rome, and its clergy, are the subjects: and that political writers, in the time of war, laudably impelled, will slander public enemies into brutes, that the nation may hate them without offence to brotherly love.

Articles of sacred faith are often so piously, yet so ignorantly expounded in what are termed systems of education and instruction—that doubts are created, where all was before secure, and infidelity sown, where it was meant to be extirpated.

In this general failure of human perfection, the German author of this play has compassionated—and with a high, a sublime, example before him—an adultress. But Kotzebue's pity, vitiated by his imperfect nature, has, it is said, deviated into vice; by restoring this woman to her former rank in life, under the roof of her injured husband.

To reconcile to the virtuous spectator this indecorum, most calamitous woes are first depicted as the consequence of illicit love. The deserted husband and the guilty wife are both presented to the audience as voluntary exiles from society: the one through poignant sense of sorrow for the connubial happiness he has lost—the other, from deep contrition for the guilt she has incurred.

The language, as well as the plot and incidents, of this play, describe, with effect, those multiplied miseries which the dishonour of a wife spreads around; but draws more especially upon herself, her husband, and her children.

Kemble's emaciated frame, sunken eye, drooping head, and death-like paleness; his heart-piercing lamentation, that—"he trusted a friend who repaid his hospitality, by alluring from him all that his soul held dear,"—are potent warnings to the modern husband.

Mrs. Siddons, in Mrs. Haller (the just martyr to her own crimes) speaks in her turn to every married woman; and, in pathetic bursts of grief—in looks of overwhelming shame—in words of deep reproach against herself and her seducer—"conjures each wife to revere the marriage bond."

Notwithstanding all these distressful and repentant testimonies, preparatory to the reunion of this husband and wife, a delicate spectator feels a certain shudder when the catastrophe takes place,—but there is another spectator more delicate still, who never conceives, that from an agonizing, though an affectionate embrace, (the only proof of reconciliation given, for the play ends here), any farther endearments will ensue, than those of participated sadness, mutual care of their joint offspring, and to smooth each other's passage to the grave.

But should the worst suspicion of the scrupulous critic be true, and this man should actually have taken his wife "for better or for worse," as on the bridal day—can this be holding out temptation, as alleged, for women to be false to their husbands? Sure it would rather act as a preservative. What woman of common understanding and common cowardice, would dare to dishonour and forsake her husband, if she foresaw she was ever likely to live with him again?