The Strange Adventures of Eric Blackburn 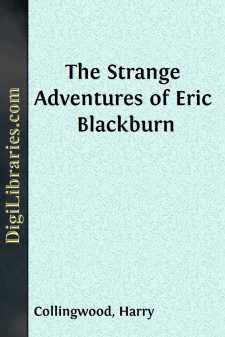 It happened on our seventh night out from Cape Town, when we had accomplished about a third of the distance between that city and Melbourne.

The ship was the Saturn, of the well-known Planet Line of combined freight and passenger steamers trading between London, Cape Town, and Melbourne; and I—Eric Blackburn, aged a trifle over twenty-three years—was her fourth officer.

The Saturn was a brand-new ship, this being her maiden voyage. She was a twin-screw, of 9800 tons register, 100 A1 at Lloyd’s, steaming 14 knots; and she had accommodation for 432 passengers, of whom 84 were first class, 128 second class, and 220 steerage; and every berth was occupied, the steerage crowd consisting mostly of miners attracted to Australia by the rumour of a newly discovered goldfield of fabulous richness. The crew of the ship numbered, all told, 103; therefore, when the catastrophe occurred, the Saturn was responsible for the lives of 535 people, of whom about 120 were women and children.

I was officer of the watch, and was therefore on the bridge when it happened, the time being shortly after six bells in the middle watch, or say about a quarter past three o’clock in the morning. The weather was fine, with so moderate a westerly wind blowing that the speed of the ship just balanced it, the smoke and sparks from the funnel rising straight up into the air when the firemen shovelled coal into the furnaces; and apart from the long westerly swell there was very little sea running. The motion of the ship was therefore very easy, just a slow roll of four or five degrees to port and starboard, and an equally slow, gentle rise and fall of the ship over the swell that followed us. The moon was only four days old, consequently she had set hours earlier, but the sky was cloudless, the air was clear, and the stars, shining brilliantly, afforded light enough to reveal a ship at a distance of quite three miles; it would be difficult, therefore, to imagine conditions of more apparently perfect safety than those at the moment prevailing aboard the Saturn. Yet destruction came upon us in a manner, and with a suddenness, that was absolutely appalling.

I was pacing the bridge from one extremity to the other, keeping a sharp look-out ahead and all round the ship; and when, at the port end of my promenade, I wheeled on my return march, there was no sign that but a few minutes intervened between us and eternity. But as I approached the wheel-house I became aware of a sudden access of light in the sky behind me, illuminating the entire ship in a radiance that increased with incredible rapidity, while at the same moment a low humming sound became audible that also grew in volume as rapidly as the light. Wheeling sharply round, to ascertain the meaning of this strange phenomenon, I heard the helmsman ejaculate, through the open window of the wheel-house: