The Story of Troy 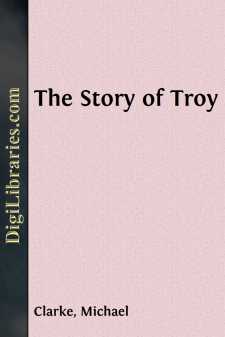 I. TROY BEFORE THE SIEGE. Design by Burne-Jones.

That part of Asia Minor which borders the narrow channel now known as the Dar-da-nellesГЉВ№, was in ancient times called TroГЉВ№as. Its capital was the city of Troy, which stood about three miles from the shore of the Æ-geГЉВ№an Sea, at the foot of Mount Ida, near the junction of two rivers, the SimГЉВ№o-is, and the Sca-manГЉВ№der or XanГЉВ№thus. The people of Troy and Troas were called Trojans.

Some of the first settlers in northwestern Asia Minor, before it was called Troas, came from Thrace, a country lying to the north of Greece. The king of these ThraГЉВ№cian colonists was TeuГЉВ№cer. During his reign a prince named DarГЉВ№danus arrived in the new settlement. He was a son of Jupiter, and he came from SamГЉВ№o-thrace, one of the many islands of the Ægean Sea. It is said that he escaped from a great flood which swept over his native island, and that he was carried on a raft of wood to the coast of the kingdom of Teucer. Soon afterwards he married Teucer's daughter. He then built a city for himself amongst the hills of Mount Ida, and called it Dar-daГЉВ№ni-a; and on the death of Teucer he became king of the whole country, to which he gave the same name, Dardania.

Dardanus was the ancestor of the Trojan line of kings. He had a grandson named Tros, and from him the city Troy, as well as the country Troas, took its name. The successor of King Tros was his son IГЉВ№lus. By him Troy was built, and it was therefore also called IlГЉВ№i-um or IlГЉВ№i-on; hence the title of Homer's great poem,—the Iliad. From the names Dardanus and Teucer the city of Troy has also been sometimes called Dardania and TeuГЉВ№cri-a, and the Trojans are often referred to as Dardanians and Teucrians. Ilus was succeeded by his son La-omГЉВ№e-don, and Laomedon's son PriГЉВ№am was king of Troy during the famous siege.

The story of the founding of Troy is a very interesting one. Ilus went forth from his father's city of Dardania, in search of adventures, as was the custom of young princes and heroes in those days; and he traveled on until he arrived at the court of the king of PhrygГЉВ№i-a, a country lying east of Troas. Here he found the people engaged in athletic games, at which the king gave valuable prizes for competition. Ilus took part in a wrestling match, and he won fifty young men and fifty maidens,—a strange sort of prize we may well think, but not at all strange or unusual in ancient times, when there were many slaves everywhere. During his stay in Phrygia the young Dardanian prince was hospitably entertained at the royal palace. When he was about to depart, the king gave him a spotted heifer, telling him to follow the animal, and to build a city for himself at the place where she should first lie down to rest.

Ilus did as he was directed....