The Story of the Rock 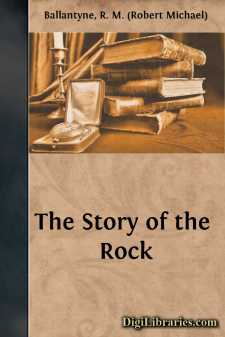 “At mischief again, of course: always at it.”

Mrs Potter said this angrily, and with much emphasis, as she seized her son by the arm and dragged him out of a pool of dirty water, into which he had tumbled.

“Always at mischief of one sort or another, he is,” continued Mrs Potter, with increasing wrath, “morning, noon, and night—he is; tumblin’ about an’ smashin’ things for ever he does; he’ll break my heart at last—he will. There: take that!”

“That,” which poor little Tommy was desired to take, was a sounding box on the ear, accompanied by a violent shake of the arm which would have drawn that limb out of its socket if the child’s bones and muscles had not been very tightly strung together.

Mrs Potter was a woman of large body and small brain. In respect of reasoning power, she was little better than the wooden cuckoo which came out periodically from the interior of the clock that stood over her own fireplace and announced the hours. She entertained settled convictions on a few subjects, in regard to which she resembled a musical box. If you set her going on any of these, she would harp away until she had played the tune out, and then begin over again; but she never varied. Reasons, however good, or facts, however weighty, were utterly powerless to penetrate her skull: her “settled convictions” were not to be unsettled by any such means. Men might change their minds; philosophers might see fit to alter their opinions; weaklings of both sexes and all ages might trim their sails in accordance with the gales of advancing knowledge, but Mrs Potter—no: never! her colours were nailed to the mast. Like most people who unite a strong will with an empty head, she was “wiser in her own conceit than eleven men that can render a reason:” in brief, she was obstinate.

One of her settled convictions was that her little son Tommy was “as full of mischief as a hegg is full of meat.” Another of these convictions was that children of all ages are tough; that it does them good to pull them about in a violent manner, at the risk even of dislocating their joints. It mattered nothing to Mrs Potter that many of her female friends and acquaintances held a different opinion. Some of these friends suggested to her that the hearts of the poor little things were tender, as well as their muscles and bones and sinews; that children were delicate flowers, or rather buds, which required careful tending and gentle nursing. Mrs Potter’s reply was invariably, “Fiddlesticks!” she knew better. They were obstinate and self-willed little brats that required constant banging. She knew how to train ’em up, she did; and it was of no manner of use, it wasn’t, to talk to her upon that point.

She was right. It was of no use. As well might one have talked to the wooden cuckoo, already referred to, in Mrs Potter’s timepiece.

“Come, Martha,” said a tall, broad-shouldered, deep-voiced man at her elbow, “don’t wop the poor cheeld like that....