The Story of the Kearsarge and Alabama 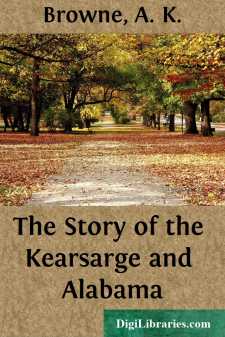 On Sunday, June 12th, 1864, the U. S. Steamer Kearsarge was lying at anchor in the Scheldt, off Flushing, Holland. Suddenly appeared the cornet at the fore—an unexpected signal, that compelled absent officers and men to repair on board. Steam was raised, and immediately after a departure made, when all hands being called, the nature of the precipitate movement became apparent. Captain Winslow, in a brief address, announced the welcome intelligence of the reception of a telegram from his Excellency, Mr. Dayton, Minister Resident at Paris, to the effect that the notorious Alabama had arrived the day previous at Cherbourg, France; hence, the urgency of departure, the probability of an encounter, and the confident expectation of her destruction or capture. The crew responded by cheers.

The succeeding day witnessed the arrival of the Kearsarge at Dover, England, for dispatches, and the day after (Tuesday) her appearance off Cherbourg Breakwater. At anchor in the harbor was seen the celebrated Alabama—a beautiful specimen of naval architecture, eliciting encomiums for evident neatness, good order, and a well-disciplined crew, indicative of efficiency in any duty required. The surgeon of the Kearsarge proceeded on shore and obtained pratique for boats. Owing to the enforcement of the neutral twenty-four hour regulation, to anchor, became inexpedient; the result was the establishment of a vigilant watch, alternately, at each of the harbor entrances, which continued to the moment of the engagement.

On Wednesday, Captain Winslow paid an official visit to the Admiral commanding the Maritime District and the U. S. Commercial Agent, bringing on his return the unanticipated news that Captain Semmes declared his intention to fight. At first, the assertion was hardly credited, the policy of the Alabama being regarded as in opposition to a conflict, but even the doubters were speedily half convinced when the character of the so-called challenge was disclosed, viz.:

"Sir: I hear that you were informed by the U. S. Consul, that the Kearsarge was to come to this port solely for the prisoners landed by me, and that she was to depart in twenty-four hours. I desire you to say to the U. S. Consul that my intention is to fight the Kearsarge, as soon as I can make the necessary arrangements. I hope these will not detain me more than until to-morrow evening, or after the morrow morning at farthest. I beg she will not depart before I am ready to go out.

"I have the honor to be

This communication was sent by Mr. Bonfils to the U. S. Commercial Agent, Mr. Liais, with a request that the latter would furnish a copy to Captain Winslow for his guidance. There was no other defiance to combat. The letter that passed between the commercial agents, was the challenge about which so much has been written. Captain Semmes indirectly informed Captain Winslow of his desire for a combat. Captain Winslow made no reply, but prepared his ship to meet the opponent, thereby tacitly acknowledging the so-called challenge and its acceptance.

Requisite preparations were immediately instituted for battle, with no relaxation of the watch. Thursday passed; Friday came, and yet no Alabama appeared. According to report, important arrangements were being effected; a zeal was displayed in the reception of coals, the transmission of valuables on shore, and the sharpening of swords, cutlasses, boarding-pikes, and battle-axes. To the observer this preparation confirmed the assurance of the certainty of a fight. An intended surprise by night was suggested, and measures precautionary taken. Dispatches were brought from Mr. Dayton, Minister at Paris, by his son, who with difficulty had obtained permission from the Admiral commanding to visit the Kearsarge....