The Story of the Heavens 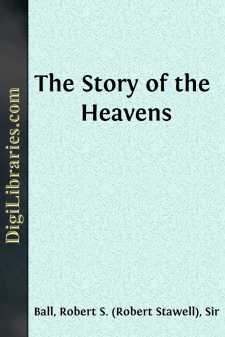 Add to My Favorites
Published: 8 years ago
Downloads: 90
Rating: (0 Votes)

CHAPTER I. THE ASTRONOMICAL OBSERVATORY.

The earliest rudiments of the Astronomical Observatory are as little known as the earliest discoveries in astronomy itself. Probably the first application of instrumental observation to the heavenly bodies consisted in the simple operation of measuring the shadow of a post cast by the sun at noonday. The variations in the length of this shadow enabled the primitive astronomers to investigate the apparent movements of the sun. But even in very early times special astronomical instruments were employed which possessed sufficient accuracy to add to the amount of astronomical knowledge, and displayed considerable ingenuity on the part of the designers.

Professor Newcomb thus writes: "The leader was Tycho Brahe, who was born in 1546, three years after the death of Copernicus. His attention was first directed to the study of astronomy by an eclipse of the sun on August 21st, 1560, which was total in some parts of Europe. Astonished that such a phenomenon could be predicted, he devoted himself to a study of the methods of observation and calculation by which the prediction was made. In 1576 the King of Denmark founded the celebrated observatory of Uraniborg, at which Tycho spent twenty years assiduously engaged in observations of the positions of the heavenly bodies with the best instruments that could then be made. This was just before the invention of the telescope, so that the astronomer could not avail himself of that powerful instrument. Consequently, his observations were superseded by the improved ones of the centuries following, and their celebrity and importance are principally due to their having afforded Kepler the means of discovering his celebrated laws of planetary motion."

The direction of the telescope to the skies by Galileo gave a wonderful impulse to the study of the heavenly bodies. This extraordinary man is prominent in the history of astronomy, not alone for his connection with this supreme invention, but also for his achievements in the more abstract parts of astronomy. He was born at Pisa in 1564, and in 1609 the first telescope used for astronomical observation was constructed. Galileo died in 1642, the year in which Newton was born. It was Galileo who laid with solidity the foundations of that science of Dynamics, of which astronomy is the most splendid illustration; and it was he who, by promulgating the doctrines taught by Copernicus, incurred the wrath of the Inquisition.

The structure of the human eye in so far as the exquisite adaptation of the pupil is concerned presents us with an apt illustration of the principle of the telescope. To see an object, it is necessary that the light from it should enter the eye. The portal through which the light is admitted is the pupil. In daytime, when the light is brilliant, the iris decreases the size of the pupil, and thus prevents too much light from entering. At night, or whenever the light is scarce, the eye often requires to grasp all it can. The pupil then expands; more and more light is admitted according as the pupil grows larger. The illumination of the image on the retina is thus effectively controlled in accordance with the requirements of vision.

A star transmits to us its feeble rays of light, and from those rays the image is formed. Even with the most widely-opened pupil, it may, however, happen that the image is not bright enough to excite the sensation of vision. Here the telescope comes to our aid: it catches all the rays in a beam whose original dimensions were far too great to allow of its admission through the pupil. The action of the lenses concentrates those rays into a stream slender enough to pass through the small opening....