The Story of the Guides 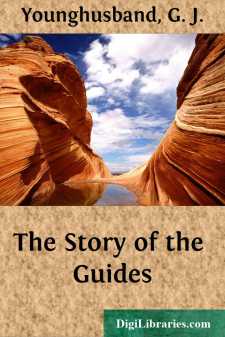 CHAPTER I FIRST STEPS IN WAR

It is given to some regiments to spread their achievements over the quiet centuries, while to the lot of others it falls to live, for a generation or two, in an atmosphere of warlike strife and ever present danger. The Guides have been, from a soldier's point of view, somewhat fortunate in seeing much service during the past sixty years; and thus their history lends itself readily to a narrative which is full of adventure and stirring deeds. The story of those deeds may, perchance, be found of interest to those at home, who like to read the gallant record of the men who fight their battles in remote and unfamiliar corners of the Empire across the seas.

To Sir Henry Lawrence, the preux chevalier, who died a soldier's death in the hallowed precincts of Lucknow, the Guides owe their name and origin. At a time when soldiers fought, and marched, and lived in tight scarlet tunics, high stocks, trousers tightly strapped over Wellington boots, and shakos which would now be looked on as certain death, Sir Henry evolved the startling heresy that to get the best work out of troops, and to enable them to undertake great exertions, it was necessary that the soldier should be loosely, comfortably, and suitably clad, that something more substantial than a pill-box with a pocket-handkerchief wrapped round it was required as a protection from a tropical sun, and that footgear must be made for marching, and not for parading round a band-stand.

Martinets of the old school gravely shook their heads, and trembled for the discipline of men without stocks and overalls. Men of the Irregular Cavalry, almost as much trussed and padded as their Regular comrades (who were often so tightly clad as to be unable to mount without assistance), looked with good-natured tolerance on a foredoomed failure. But Sir Henry Lawrence had the courage of his opinions, and determined to put his theories to practice, though at first on a small scale.

Not only were the Guides to be sensibly clothed, but professionally also they were to mark a new departure. In 1846 the Punjab was still a Sikh province, and the administration was only thinly strengthened by a sprinkling of British officers. Men, half soldiers, half civilians, and known in India under the curious misnomer of Political Officers,—a class to whom the British Empire owes an overwhelming debt—were scattered here and there, hundreds of miles apart, and in the name of the Sikh Durbar practically ruled and administered provinces as large as Ireland or Scotland. The only British troops in the country were a few of the Company's regiments, quartered at Lahore to support the authority of the Resident,—a mere coral island in the wide expanse. What Sir Henry Lawrence felt was the want of a thoroughly mobile body of troops, both horse and foot, untrammelled by tradition, ready to move at a moment's notice, and composed of men of undoubted loyalty and devotion, troops who would not only be of value in the rough and tumble of a soldier's trade, but would grow used to the finer arts of providing skilled intelligence.

The title selected for the corps was in itself a new departure in the British Army, and history is not clear as to whether its pre-ordained duties suggested the designation to Sir Henry Lawrence, or whether, in some back memory, its distinguished predecessor in the French army stood sponsor for the idea. Readers of the Napoleonic wars will remember that, after the battle of Borghetto, the Great Captain raised a Corps des Guides, and that this was the first inception of the Corps d'Elite, which later grew into the Consular Guard, and later still expanded into the world-famed Imperial Guard ten thousand strong.

But whatever the history of the inception of its title, the duties of the Corps of Guides were clearly and concisely defined in accordance with Sir Henry's precepts. It was to contain trustworthy men, who could, at a moment's notice, act as guides to troops in the field; men capable, too, of collecting trustworthy intelligence beyond, as well as within, our borders; and, in addition to all this, men, ready to give and take hard blows, whether on the frontier or in a wider field....