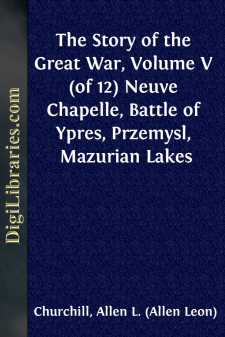 PREPARATIONS FOR AN OFFENSIVE

During the greater part of the winter of 1914-15, the fighting along the western front had been almost constant, but had resulted in little that either side could justly assert to be a success. The rigors inevitable in such a mode of warfare had become almost beyond human endurance, and commanders on both sides looked forward to a more active campaign.

An immense amount of ammunition had been stored by the French in and around Perthes in anticipation of a forward movement; and, by the second week of February, a quarter of a million men of the French army had been assembled near that place. They were opposite a section of the German trenches which was about twelve miles long, extending from Ville-sur-Tourbe in the Argonne to the village of Souain. Early in the year this section had been held by only two divisions of Rhinelanders. These two divisions had suffered severely from the heavy gun fire which the French had directed against them by means of the successful work of the French aviators. The French infantry also had done effective work in the short rush which they had been making, gaining on an average about twelve yards a day. Following the concentration of French troops, the German commanders brought up reenforcements to the number of 80,000. Some of these were taken from La Bassée, and others from a contingent which had been intended for a northern offensive movement.

Because of the chalk formation of the soil in this section of the front, the excessive moisture of this season of the year drained Page 1280 rapidly, leaving exposed an undulating section on which were small forests of fir trees. The nature of the ground made it an easy matter to move troops even in winter. General Joffre took advantage of this fact, and assembled a quarter of a million men against the German lines in Champagne. This caused the German commanders to mass troops just in front of Perthes. The concentration continued until there were 220,000 German soldiers packed there in close formation. The French attacked, and quickly a rain of more than a hundred thousand shells fell upon the Germans.

The Germans sought to reply by bringing up twenty-two batteries of heavy guns and sixty-four field batteries; but the French gunners kept command of the field. In the twenty days' battle—from February 16 to March 7, 1915—the French won scarcely a mile of ground; but they found and buried 10,000 German dead. The French staff estimated that 60,000 German soldiers had been put out of action. The German staff admitted they had lost more men in this action than in the campaign in East Prussia against the Russians, where fourteen German army corps were engaged. The French lost less than 10,000 men.