The Story of the Great War, Volume III (of 8) History of the European War from Official Sources 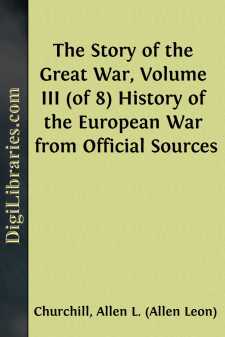 CAMPAIGN IN THE CAUCASUS

Disquieting as was the British offensive in Mesopotamia, the Turkish General Staff were not to be drawn by it from considerations of larger strategy. Acting in agreement with the German and Austrian General Staffs, plans were rapidly pushed for an aggressive offensive in the Caucasus, that old-time battling ground of the Russians and the Turks. Germany was being hotly pressed in France by the armies of Belgium, France, and England, and feared an offensive on the part of the Russian army.

Across the great isthmus separating the Caspian and Black Seas run the Caucasus Mountains. Parallel to this range of towering mountains, the highest in Europe, runs the frontier line of Russia and Turkey and Russia and Persia, winding in and out among the Trans-Caucasian Mountains. About two hundred miles from the Russo-Turkish frontier stands Tiflis, the rich and ancient capital of Georgia, and one of the prime objectives of any Turkish offensive. One of the few railroads of this wild country runs from Tiflis through the Russian fortress of Kars, forty-five miles from the Turkish frontier, to Sarikamish, thirty miles nearer. On the Turkish side the fortress of Erzerum stands opposed to Kars, but suffering in comparison by the lack of railroad communication with the interior of Turkey.

Despite all these discouraging circumstances, however, the Turkish General Staff, dominated by the indefatigable and ambitious Enver Pasha, was not to be deterred. A brilliant and daring plan of campaign, aiming at the annihilation or capture of the entire Russian Caucasian army, the seizure of Kars and Tiflis, and the control of the immensely valuable and important Caspian oil fields, was prepared. The unwelcome task of carrying this plan to completion and success was intrusted to Hassan Izzet Pasha, under the general guidance of Enver Pasha and his staff of German advisers.

The heroic efforts of the Turkish troops, their grim but hopeless battle against equally brave troops, appalling weather conditions, and insuperable obstacles, their failure and defeat when on the very verge of complete success, make an intensely interesting story.

Stationed at Erzerum, Turkey had the Ninth, Tenth, and Eleventh Corps. In addition, the Thirty-seventh Arab division had been brought up from Bagdad to strengthen the Eleventh Corps. At Trebizond two divisions of the First Corps had been brought from Constantinople by sea. These forces totaled about 140,000 troops. At and about Kars, General Woronzov, the Russian commander, had between 100,000 and 110,000 troops at his disposal from first to last. But although weaker in numbers he had the inestimable advantage of operating with a line of railroad at his back, whereas the Turkish commander had to depend entirely upon road transit, 500 miles from the nearest railroad.

The conditions absolutely necessary for the success of the Turkish plan were the holding of the Russian force beyond Sarikamish, and the accurate timing of the flanking attacks, otherwise the Russian commander would be able to deal with each force separately and defeat and perhaps destroy them....