The Story of the Great War, Volume III (of 12) The War Begins, Invasion of Belgium, Battle of the Marne 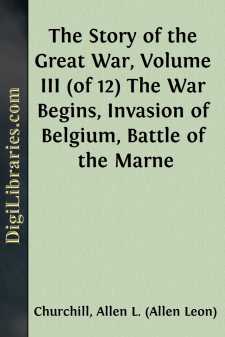 The first great campaign on the western battle grounds in the European War began on August 4, 1914. On this epoch-making day the German army began its invasion of Belgium—with the conquest of France as its ultimate goal. Six mighty armies stood ready for the great invasion. Their estimated total was 1,200,000 men. Supreme over all was the Emperor as War Lord, but Lieutenant General Helmuth van Moltke, chief of the General Staff, was the practical director of military operations. General van Moltke was a nephew of the great strategist of 1870, and his name possibly appealed as of happy augury for repeating the former capture of Paris.

The First Army was assembled at Aix-la-Chapelle in the north of Belgium, within a few miles of the Dutch frontier. It was under the command of General van Kluck. He was a veteran of both the Austrian and Franco-Prussian Wars, and was regarded as an able infantry leader. His part was to enter Belgium at its northern triangle, which projects between Holland and Germany, occupy Liege, deploy on the great central plains of Belgium, then sweep toward the French northwestern frontier in the German dash for Paris and the English Channel. His army thus formed the right wing of the whole German offensive. It was composed of picked corps, including cavalry of the Prussian Guard.

The Second Army had gathered in the neighborhood of Limbourg under the command of General von Bülow. Its advance was planned down the valleys of the Ourthe and Vesdre to a junction with Von Kluck at Liege, then a march by the Meuse Valley upon Namur and Charleroi. In crossing the Sambre it was to fall into place on the left of Von Kluck's army.

The German center was composed of the Third Army under Duke Albrecht of Württemberg, the Fourth Army led by the crown prince, and the Fifth Army commanded by the Crown Prince of Bavaria. It was assembled on the line Neufchateau-Treves-Metz. Its first offensive was the occupation of Luxemburg. This was performed, after a somewhat dramatic protest by the youthful Grand Duchess, who placed her motor car across the bridge by which the Germans entered her internationally guaranteed independent state. The German pretext was that since Luxemburg railways were German controlled, they were required for the transport of troops. Preparations were then made for a rapid advance through the Ardennes upon the Central Meuse, to form in order upon the left of Von Bülow's army. A part of the Fifth Army was to be detached for operations against the French fortress of Verdun.

The main plan of the German General Staff, therefore was a wide enveloping movement by the First and Second Armies to sweep the shore of the English Channel in their march on Paris, a vigorous advance of the center through the Ardennes for the same destination, and readiness for battle by the Sixth Army for any French force which might be tempted into Alsace....