The Story of the Great War, Volume I (of 8) Introductions; Special Articles; Causes of War; Diplomatic and State Papers 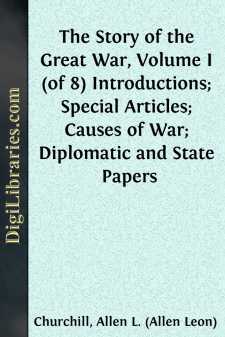 "Go yourselves, every man of you, and stand in the ranks and either a victory beyond all victories in its glory awaits you, or falling you shall fall greatly, and worthy of your past."—Demosthenes To the Athenians.

What lesson will America draw from the present Great War? Must she see the heads of her own children at the foot of the guillotine to realize that it will cut, or will she accept the evidence of the thousands which have lain there before? Will she heed the lesson of all time, that national unpreparedness means national downfall, or will she profit from the experience and misfortunes of others and take those needed measures of preparedness which prudence and wisdom dictate. In a word, will she draw any valuable lessons from the Great War? This is the question which is so often asked. As yet there is no answer.

It is the question uppermost in the minds of all those who are intelligently interested in our country's welfare and safety. It is the question which vitally concerns all of us, as it concerns the defense and possibly the very existence of our nation. The answer must be "Preparedness." If we are to live, preparedness to oppose the force of wrong with the strength of right. Will it be? That's the question! Or will America drift on blind to the lessons of the world tragedy, heedless of consequences, concerned with the accumulation of wealth, satiated with a sense of moral worth which the world does not so fully recognize, planning to capture the commerce of the warring nations, and expecting at the same time to retain their friendship and regard. Let us hope that, in the light of what is, and as a preparation against what may be, the answer will be characteristic of a great people, peaceful but prudent and foreseeing; that it will be thorough, carefully thought-out preparedness; preparedness against war. A preparedness which if it is to be lasting and secure must be founded upon the moral organization of our people; an organization which will create and keep alive in the heart of every citizen a sense not only of obligation for service to the nation in time of war or trouble, but also of obligation to so prepare himself as to render this service effective. An organization which will recognize that the basic principle upon which a free democracy or representative government rests, and must rest, if they are to survive the day of stress and trouble, is, that with manhood suffrage goes manhood obligation for service, not necessarily with arms in hand, but for service somewhere in that great complex mass which constitutes the organization of a nation's might and resources for defense; organization which will make us think in terms of the nation and not those of city, State, or personal interest; organization which will result in all performing service for the nation with singleness of purpose in a common cause—preparedness for defense: preparedness to discharge our plain duty whatever it may be. Such service will make for national solidarity, the doing away with petty distinctions of class and creed, and fuse the various elements of this people into one homogeneous mass of real Americans, and leave us a better and a stronger people.