The Story of The American Legion 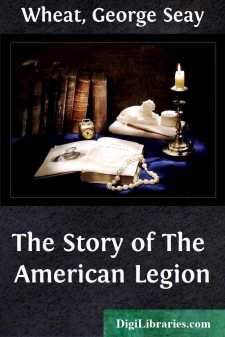 I believe that the army of to-day, when it goes back to citizen thinking and citizen acting, will be capable of so contributing to the commonwealth of the United States as to change the character of the whole country and lift it up to a higher plane.

On a midsummer morning in 1918, ambulance after ambulance unloaded its cargo of wounded humanity at a base hospital in Paris. The wounded were being conveyed rapidly from the front and the entire hospital was astir with nurses, surgeons, and orderlies. A major, surgeon, almost staggered out of an operating room where he had been on duty for twenty-two hours and started for his quarters when a colonel arrived on an inspection trip.

"Pretty busy," remarked the colonel as he acknowledged the major's salute.

"Busy? Busy!" replied the major. "Good Lord, the only people about here that aren't busy are the dead ones. Even the wounded are busy planning to hobble around at conventions when the Big Show is over. Already they are talking about how they intend to take a hand in things after the war when they get home."

Over across the street a sergeant, limping slightly, stopped under a shade tree and leaned against it to rest. He was almost well of his wound and eagerly awaited the word that would send him to join his regiment, the Twenty-sixth United States Infantry. As he paused under the tree another soldier with a mending wound in the knee and just able to be about stopped to speak to him. The sergeant's hand rose in quick salute for the newcomer was an officer.

"Expect to get back soon, sergeant?" said the officer.

"Yes sir," he replied. "Anxious to go back and get the whole job over, sir."

"So am I," responded the officer. "But what will we all do when the Germans really are licked?"

"Go home and start a veterans' association for the good of the country, sir," the sergeant answered.

Lieutenant Colonel Theodore Roosevelt, then major, was the officer, and Sergeant William Patterson, later killed in action, was the enlisted man, and the institution was Base Hospital No. 2.

Colonel Roosevelt, who was in the hospital convalescing from a wound in his knee caused by a machine gun bullet, told me the story and said it was the first time that he had heard the subject of a veterans' association mentioned, although he had thought of it frequently himself as an organization with boundless possibilities for good. He found later that it was being very generally discussed by men in Base Hospital No. 2, particularly those who were so badly wounded that they could not be sent to the front again and who knew they must further serve their country along peaceful lines at home.

This was during war time, remember!

Then came the armistice!

When our victorious armies were wending their way towards the Rhine, when men of the navy and the marine corps realized that peace had come and that home was again within reach, this thought of a veterans' band, which had slumbered far back in the subconscious thoughts of all of them, burst into objectivity. An association of some sort was widely discussed not only by the men but by the officers as well. But how could even the start of it be begun? Those who considered the project most seriously were confronted with a difficulty which seemed at first to be almost insurmountable: that was the difficulty of assembling at one time and in one place a gathering which might at least approximately represent the whole army, navy, marine corps, or even the A.E.F.

This difficulty tended to narrow what is believed to have been the wish of everyone when he first thought of the matter, that is the hope that it would be another Grand Army of the Republic, another United Confederate Veterans, but greater than either because representative of a United Country....