The Story of the 6th Battalion, The Durham Light Infantry France, April 1915-November 1918 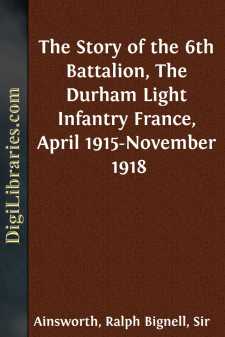 The end of March, 1915, found the 50th (Northumbrian) Division of the Territorial Force awaiting orders to proceed overseas. The infantry of the Division consisted of the 149th Infantry Brigade (4th, 5th, 6th and 7th Battalions Northumberland Fusiliers), the 150th Infantry Brigade (4th Battalion East Yorkshire Regiment, 4th and 5th Battalions Yorkshire Regiment, and 5th Battalion The Durham Light Infantry), and the 151st Infantry Brigade (6th, 7th, 8th and 9th Battalions The Durham Light Infantry). Early in April, when the 6th Battalion The Durham Light Infantry were in billets at Gateshead, the orders arrived and on the 10th April Capt. F. Walton proceeded to Havre to make arrangements for the arrival of the transport section. The first detachment of men to leave Gateshead consisted of the transport and machine-gun sections which, under Major J.E. Hawdon, Second in Command, and Lieut. H.T. Bircham, Transport Officer, entrained at the Cattle Market, Newcastle, on the 17th April for Southampton, en route for Havre.

The following day it entrained at Pont de Briques Station, on the train which brought the transport and machine-gun sections from Havre. The complete battalion detrained at Cassel, and after marching all night arrived in billets at Hardifort at 5 a.m. on the 21st April.

On the 23rd April orders were received to march at very short notice to Steenvoorde, where the whole of the 151st Infantry Brigade, commanded at this time by Brig.-General Martin, was assembled in a field at the eastern end of the town. During the remainder of the day the men were allowed to rest. At dusk two battalions of the Brigade, the 7th and 9th Battalions, marched off in fighting order. The other two Battalions (the 6th and 8th) proceeded by 'buses through Poperinghe to Vlamertinghe, where they took over a hut camp recently vacated by the 9th Royal Scots.

It was now evident that the lessons which the Battalion had learnt during its long period of training were very soon to be put into practice. The 24th April was spent in testing rifles and making final preparations for action, and in the evening an order arrived from the Brigade to get ready to move quickly. This order was given out and within half an hour the Battalion was on the pavé road, marching towards Ypres. It entered the town as night settled on it. At this date the town was not ruined and the results of the shelling were hardly noticeable. As the Battalion was passing the Cloth Hall a shell came screaming faintly towards it, and, passing over, burst with a dull roar in the city a quarter of a mile away....