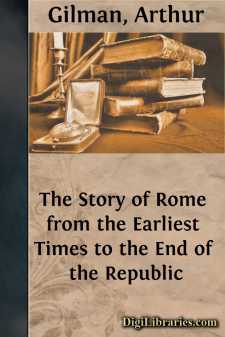 ONCE UPON A TIME.

Once upon a time, there lived in a city of Asia Minor, not far from Mount Ida, as old Homer tells us in his grand and beautiful poem, a king who had fifty sons and many daughters. How large his family was, indeed, we cannot say, for the storytellers of the olden time were not very careful to set down the actual and exact truth, their chief object being to give the people something to interest them. That they succeeded well in this respect we know, because the story of this old king and his great family of sons and daughters has been told and retold thousands of times since it was first related, and that was so long ago that the bard himself has sometimes been said never to have lived at all. Still; somebody must have existed who told the wondrous story, and it has always been attributed to a blind poet, to whom the name Homer has been given.

The place in which the old king and his great family lived was Ilium, though it is better known as Troja or Troy, because that is the name that the Roman people used for it in later times. One of the sons of Priam, for that was the name of this king, was Paris, who, though very handsome, was a wayward and troublesome youth. He once journeyed to Greece to find a wife, and there fell in love with a beautiful daughter of Jupiter, named Helen. She was already married to Menelaus, the Prince of Lacedæmonia (brother of another famous hero, Agamemnon), who had most hospitably entertained young Paris, but this did not interfere with his carrying her off to Troy. The wedding journey was made by the roundabout way of Phoenicia and Egypt, but at last the couple reached home with a large amount of treasure taken from the hospitable Menelaus.

This wild adventure led to a war of ten years between the Greeks and King Priam, for the rescue of the beautiful Helen. Menelaus and some of his countrymen at last contrived to conceal themselves in a hollow wooden horse, in which they were taken into Troy. Once inside, it was an easy task to open the gates and let the whole army in also. The city was then taken and burned. Menelaus was naturally one of the first to hasten from the smoking ruins, though he was almost the last to reach his home. He lived afterwards for years in peace, health, and happiness with the beautiful wife who had cost him so much suffering and so many trials to regain.

[Illustration: THE PLAINS OF TROY IN MODERN TIMES.]

Among the relatives of King Priam was one Anchises, a descendant of Jupiter, who was very old at the time of the war. He had a valiant son, however, who fought well in the struggle, and the story of his deeds was ever afterwards treasured up among the most precious narratives of all time. This son was named Æneas, and he was not only a descendant of Jupiter, but also a son of the beautiful goddess Venus. He did not take an active part in the war at its beginning, but in the course of time he and Hector, who was one of the sons of the king, became the most prominent among the defenders of Troy....