The Story of Julia Page 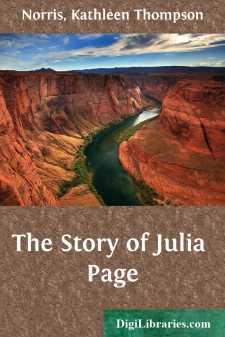 To Emeline, wife of George Page, there came slowly, in her thirtieth year, a sullen conviction that life was monstrously unfair. From a resentful realization that she was not happy in her marriage, Emeline's mind went back to the days of her pert, precocious childhood and her restless and discontented girlhood, and she felt, with a sort of smouldering fury, that she had never been happy, had never had a fair chance, at all!

It took Mrs. Page some years to come to this conclusion, for, if she was shrewd and sharp among the women she knew, she was, in essential things, an unintelligent woman, and mental effort of any sort was strange to her. Throughout her entire life, her mind had never been truly awakened. She had scrambled through Grammar School, and had followed it with five years as saleswoman in a millinery store, in that district of San Francisco known as the Mission, marrying George Page at twenty-three, and up to that time well enough pleased with herself and her life.

But that was eight years ago. Now Emeline could see that she had reached—more, she had passed—her prime. She began to see that the moods of those early years, however violent and changing, had been fed upon secret springs of hope, hope vague and baseless enough, but strong to colour a girl's life with all the brightness of a thousand dawns. There had been rare potentialities in those days, anything might happen, something would happen. The little Emeline Cox, moving between the dreary discomfort of home and the hated routine of school, might surprise all these dull seniors and school-mates some day! She might become an actress, she might become a great singer, she might make a brilliant marriage.

As she grew older and grew prettier, these vague, bright dreams strengthened. Emeline's mother was an overworked and shrill-voiced woman, whose personality drove from the Shotwell Street house whatever small comfort poverty and overcrowding and dirt left in it. She had no personal message for Emeline. The older woman had never learned the care of herself, her children, her husband, or her house. She had naturally nothing to teach her daughter. Emeline's father occasionally thundered a furious warning to his daughters as to certain primitive moral laws. He did not tell Emeline and her sisters why they might some day consent to abandon the path of virtue, nor when, nor how. He never dreamed of winning their affection and confidence, or of selecting their friends, and making home a place to which these friends might occasionally come. But he was fond of shouting, when Emeline, May, or Stella pinned on their flimsy little hats for an evening walk, that if ever a girl of his made a fool of herself and got into trouble, she need never come near his door again! Perhaps Emeline and May and Stella felt that the virtuous course, as exemplified by their parents, was not all of roses, either, but they never said so, and always shuddered dutifully at the paternal warning.

School also failed with the education of the inner Emeline, although she moved successfully from a process known as "diagramming" sentences to a serious literary analysis of "Snow-Bound" and "Evangeline," and passed terrifying examinations in ancient history, geography, and advanced problems in arithmetic....