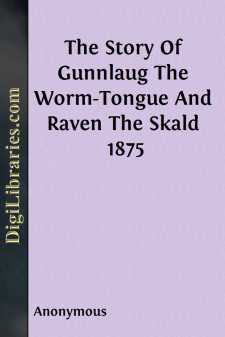 CHAPTER I. Of Thorstein Egilson and his Kin.

There was a man called Thorstein, the son of Egil, the son of Skallagrim, the son of Kveldulf the Hersir of Norway. Asgerd was the mother of Thorstein; she was the daughter of Biorn Hold. Thorstein dwelt at Burg in Burg-firth; he was rich of fee, and a great chief, a wise man, meek and of measure in all wise. He was nought of such wondrous growth and strength as his father Egil had been; yet was he a right mighty man, and much beloved of all folk.

Thorstein was goodly to look on, flaxen-haired, and the best-eyed of men; and so say men of lore that many of the kin of the Mere-men, who are come of Egil, have been the goodliest folk; yet, for all that, this kindred have differed much herein, for it is said that some of them have been accounted the most ill-favoured of men: but in that kin have been also many men of great prowess in many wise, such as Kiartan, the son of Olaf Peacock, and Slaying-Bardi, and Skuli, the son of Thorstein. Some have been great bards, too, in that kin, as Biorn, the champion of Hit-dale, priest Einar Skulison, Snorri Sturluson, and many others.

Now, Thorstein had to wife Jofrid, the daughter of Gunnar, the son of Hlifar. This Gunnar was the best skilled in weapons, and the lithest of limb of all bonderfolk who have been in Iceland; the second was Gunnar of Lithend; but Steinthor of Ere was the third. Jofrid was eighteen winters old when Thorstein wedded her; she was a widow, for Thorodd, son of Odd of Tongue, had had her to wife aforetime. Their daughter was Hungerd, who was brought up at Thorstein's at Burg. Jofrid was a very stirring woman; she and Thorstein had many children betwixt them, but few of them come into this tale. Skuli was the eldest of their sons, Kollsvein the second, Egil the third.

One summer, it is said, a ship came from over the main into Gufaros. Bergfinn was he hight who was the master thereof, a Northman of kin, rich in goods, and somewhat stricken in years, and a wise man he was withal.

Now, goodman Thorstein rode to the ship, as it was his wont mostly to rule the market, and this he did now. The Eastmen got housed, but Thorstein took the master to himself, for thither he prayed to go. Bergfinn was of few words throughout the winter, but Thorstein treated him well The Eastman had great joy of dreams.

One day in spring-tide Thorstein asked Bergfinn if he would ride with him up to Hawkfell, where at that time was the Thing-stead of the Burg-firthers; for Thorstein had been told that the walls of his booth had fallen in. The Eastman said he had good will to go, so that day they rode, some three together, from home, and the house-carles of Thorstein withal, till they came up under Hawkfell to a farmstead called Foxholes. There dwelt a man of small wealth called Atli, who was Thorstein's tenant Thorstein bade him come and work with them, and bring with him hoe and spade. This he did, and when they came to the tofts of the booth, they set to work all of them, and did out the walls....