The Story Of Frithiof The Bold 1875 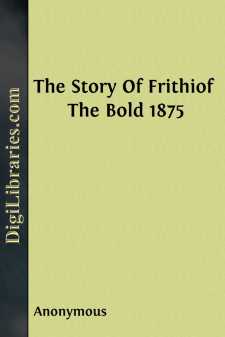 CHAPTER I. Of King Belt and Thorstein Vikingson and their Children.

Thus beginneth the tale, telling how that King Beli ruled over Sogn-land; three children had he, whereof Helgi was his first son, and Halfdan his second, but Ingibiorg his daughter. Ingibiorg was fair of face and wise of mind, and she was ever accounted the foremost of the king's children.

Now a certain strand went west of the firth, and a great stead was thereon, which was called Baldur's Meads; a Place of Peace was there, and a great temple, and round about it a great garth of pales: many gods were there, but amidst them all was Baldur held of most account. So jealous were the heathen men of this stead, that they would have no hurt done therein to man nor beast, nor might any man have dealings with a woman there.

Sowstrand was the name of that stead whereas the king dwelt; but on the other side the firth was an abode named Foreness, where dwelt a man called Thorstein, the son of Viking; and his stead was over against the king's dwelling.

Thorstein had a son by his wife called Frithiof: he was the tallest and strongest of men, and more furnished of all prowess than any other man, even from his youth up. Frithiof the Bold was he called, and so well beloved was he, that all prayed for good things for him.

Now the king's children were but young when their mother died; but a goodman of Sogn, named Hilding, prayed to have the king's daughter to foster: so there was she reared well and needfully: and she was called Ingibiorg the Fair. Frithiof also was fostered of goodman Hilding, wherefore was he foster-brother to the king's daughter, and they two were peerless among children.

Now King Beli's chattels began to ebb fast away from his hands, for he was grown old.

Thorstein had rule over the third part of the realm, and in him lay the king's greatest strength.

Every third year Thorstein feasted the king at exceeding great cost, and the king feasted Thorstein the two years between.

Helgi, Beli's son, from his youth up turned much to blood-offering: neither were those brethren well-beloved.

Thorstein had a ship called Ellidi, which pulled fifteen oars on either board; it ran up high stem and stern, and was strong-built like an ocean-going ship, and its bulwarks were clamped with iron.

So strong was Frithiof that he pulled the two bow oars of Ellidi; but either oar was thirteen ells long, and two men pulled every oar otherwhere.

Frithiof was deemed peerless amid the young men of that time, and the king's sons envied him, whereas he was more praised than they.

Now King Beli fell sick; and when the sickness lay heavy on him he called his sons to him and said to them: "This sickness will bring me to mine end, therefore will I bid you this, that ye hold fast to those old friends that I have had; for meseems in all things ye fall short of that father and son, Thorstein and Frithiof, yea, both in good counsel and in hardihood. A mound ye shall raise over me."

So with that Beli died.

Thereafter Thorstein fell sick; so he spake to Frithiof: "Kinsman," says he, "I will crave this of thee, that thou bow thy will before the king's sons, for their dignity's sake; yet doth my heart speak goodly things to me concerning thy fortune....