The Story of Extinct Civilizations of the West 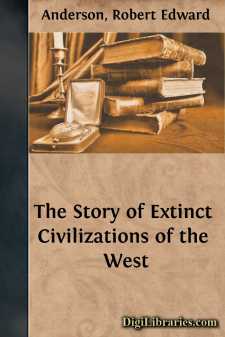 Throughout all the periods of European history, ancient or modern, no age has been more remarkable for events of first-rate importance than the latter half of the fifteenth century. The rise of the New Learning, the "discovery of the world and of man," the displacement of many outworn beliefs, these with other factors produced an awakening that startled kings and nations. Then felt they like Balboa, when

with eagle eyesHe stared at the Pacific, and all his menLooked at each other with a wild surmiseSilent, upon a peak in Darien.

It was at this historical juncture that the "middle ages" came to an end, and modern Europe had its beginning. (See Chapter .)

Why was Europe so long in discovering the vast Continent which all the time lay beyond the Western Ocean? Simply because every skipper and every "Board of Admiralty" believed that this world on which we live and move is flat and level. They did not at all realize the fact that it is ball-shaped; and that when a ball is very large (say, as large as a balloon), then any small portion of the surface must appear flat and level to a fly or "mite" traveling in that vicinity. Homer believed that our world is a flat and level plain, with a great river, Oceanus, flowing round it; and for many ages that seemed a very natural and sufficient theory. The Pythagoreans, it is true, argued that our earth must be spherical, but why? Oh, said they, because in geometry the sphere is the "most perfect" of all solid figures. Aristotle, being scientific, gave better reasons for believing that the earth is spherical or ball-shaped. He said the shadow of the earth is always round like the shadow of a ball; and the shadow of the earth can be seen during any eclipse of the moon; therefore, all who see that shadow on the moon's disk know, or ought to know, that the earth is ball-shaped. Another reason given by Aristotle is that the altitude of any star above the horizon changes when the observer travels north or south. For example, if at London a star appears to be 40° above the northern horizon, and at York the same star at the same instant appears 42½°, it is evident that 2½° is the difference (increase) of altitude at York compared with London. Such an observation shows that the road from London to York is not over a flat, level plane, but over the curved surface of a sphere, the arc of a circle, in fact.

Herodotus, the father of history, was a good geographer and an experienced traveler, yet his only conception of the world was as a flat, wide-extending surface. In Egypt he was told how Pharaoh Necho had sent a crew of Phenicians to explore the coast of Africa by setting out from the Red Sea, and how they sailed south till they had the sun on their right hand. "Absurd!" says Herodotus, in his naïve manner, "this story I can not believe." In Egypt, as in Greece or Europe generally, the sun rises on the left hand, and at noon casts a shadow pointing north; whereas in South Africa the sun at noon casts a shadow pointing south, and sunrise is therefore on the right hand....