The Story of Don Quixote 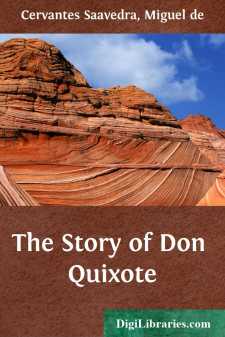 CHAPTER I Which Treats of the Character and Pursuits of the Famous Gentleman, Don Quixote of La Mancha

NEARLY four hundred years ago, there lived in the village of La Mancha in Spain an old gentleman of few worldly possessions but many books, who was given to a hardy and adventurous way of life, and who beguiled his spare time by reading the many tales of chivalry and knighthood that were in his possession.

This old gentleman was a tall, gaunt man of about fifty, with a lantern jaw and straggling gray hair, and eyes that had a sparkle of madness in them. His surname was Quixada or Quesada, and though not rich, he was well known to the country folk and had some reputation in the community where he lived.

In his younger days he was a great sportsman and used to get up before the sun to follow his favorite pursuits of hunting and hawking, but as he grew older he spent almost all his time in reading books on chivalry and knighthood with which his library was stocked; and at last he grew so fond of these books that he forgot to follow the hounds or even to look after his property, but spent all his time in his library, mulling over the famous deeds and love affairs of knights who conquered dragons and vanquished wicked enchanters.

At the time when Quesada lived, Spain was saturated with this sort of literature, and everybody wasted much time in reading books which had no merit or value of any kind and which were full of the most ridiculous and impossible adventures. On the whole they were the most utter rubbish that it was possible to print. They told about impossible deeds in the most impossible language, and were filled with ambitious sentences that meant nothing under the sun. Señor Quesada spent hours racking his brains to puzzle out the meaning of something like this:

"The reason of the unreason with which my reason is afflicted so weakens my reason that with reason I murmur at your beauty."

"The high heavens that of your divinity divinely fortify you with the stars, render you deserving of the desert your greatness deserves."

Poor Señor Quesada could not understand these sentences. Who could? No man in his right mind certainly, it would have taken a madman to read any real meaning into them. And he wasted so much time in puzzling over them that at last he became quite mad and the words in the books would appear on the walls of his room, written in letters of fire, with so bright a light that they prevented him from sleeping. From trying to read a meaning into things that had no meaning whatever, Señor Quesada was mad—as mad as the books he had been reading.

Señor Quesada lived with his niece and his housekeeper, both sensible women who loved him and who were much grieved over the havoc his books of chivalry had worked with his senses. They believed that to talk about these books made the old gentleman worse, so they refused to answer him when he argued about knights and dragons and whether this fair lady was an enchantress in disguise or only a mortal woman, and whether that dragon actually did breathe forth fire from his nostrils, or only sulphur fumes and smoke. His niece and the housekeeper would run away when he started upon one of his favorite subjects; so he turned to the society of the village curate, a learned man for those times, who knew almost as much about books of chivalry as Señor Quesada himself, and to that of Master Nicholas, the village barber. And these three friends would sit up until dawn arguing as to who was the better knight, Sir Lancelot or Amadis of Gaul, and how these both compared with the Knight of the Burning Sword, who with one back stroke cut in half two fierce and monstrous giants.

After he had become thoroughly mad from reading, and more so from such arguments and discussions, Señor Quesada hit upon the strangest notion that ever entered the head of a lunatic. He believed that he and no other was called upon to restore the entire world to the ancient conditions of chivalry, and bring back the tournaments and the courteous knights and fair ladies whose like had existed in the times of the famous King Arthur of Britain. Believing this, it was an easy step for him to think that the world was still full of giants and fierce dragons for him to vanquish, and that as a man of honor and skill at arms he must leave his comfortable home and do battle with them....