The Story of Burnt Njal: the great Icelandic tribune, jurist, and counsellor 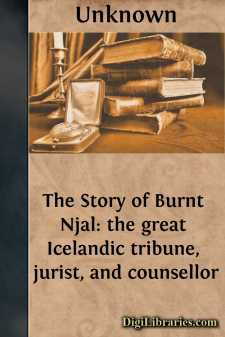 THE STORY OF BURNT NJAL 1. OF FIDDLE MORD

There was a man named Mord whose surname was Fiddle; he was the son of Sigvat the Red, and he dwelt at the "Vale" in the Rangrivervales. He was a mighty chief, and a great taker up of suits, and so great a lawyer that no judgments were thought lawful unless he had a hand in them. He had an only daughter, named Unna. She was a fair, courteous, and gifted woman, and that was thought the best match in all the Rangrivervales.

Now the story turns westward to the Broadfirth dales, where, at Hauskuldstede, in Laxriverdale, dwelt a man named Hauskuld, who was Dalakoll's son, and his mother's name was Thorgerda.(1) He had a brother named Hrut, who dwelt at Hrutstede; he was of the same mother as Hauskuld, but his father's name was Heriolf. Hrut was handsome, tall and strong, well skilled in arms, and mild of temper; he was one of the wisest of men — stern towards his foes, but a good counsellor on great matters. It happened once that Hauskuld bade his friends to a feast, and his brother Hrut was there, and sat next him. Hauskuld had a daughter named Hallgerda, who was playing on the floor with some other girls. She was fair of face and tall of growth, and her hair was as soft as silk; it was so long, too, that it came down to her waist. Hauskuld called out to her, "Come hither to me, daughter." So she went up to him, and he took her by the chin, and kissed her; and after that she went away.

Then Hauskuld said to Hrut, "What dost thou think of this maiden? Is she not fair?" Hrut held his peace. Hauskuld said the same thing to him a second time, and then Hrut answered, "Fair enough is this maid, and many will smart for it, but this I know not, whence thief's eyes have come into our race." Then Hauskuld was wroth, and for a time the brothers saw little of each other.

It happened once that those brothers, Hauskuld and Hrut, rode to the Althing, and there was much people at it. Then Hauskuld said to Hrut, "One thing I wish, brother, and that is, that thou wouldst better thy lot and woo thyself a wife."

Hrut answered, "That has been long on my mind, though there always seemed to be two sides to the matter; but now I will do as thou wishest; whither shall we turn our eyes?"

Hauskuld answered, "Here now are many chiefs at the Thing, and there is plenty of choice, but I have already set my eyes on a spot where a match lies made to thy hand. The woman's name is Unna, and she is a daughter of Fiddle Mord, one of the wisest of men. He is here at the Thing and his daughter too, and thou mayest see her if it pleases thee."

Now the next day, when men were going to the High Court, they saw some well-dressed women standing outside the booths of the men from the Rangrivervales....