The Story of an African Farm, a novel 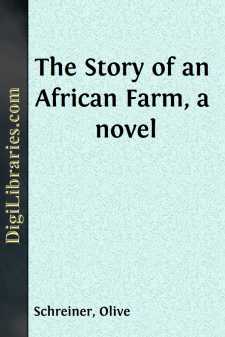 Chapter 1.I. Shadows From Child-Life.

The full African moon poured down its light from the blue sky into the wide, lonely plain. The dry, sandy earth, with its coating of stunted karoo bushes a few inches high, the low hills that skirted the plain, the milk-bushes with their long finger-like leaves, all were touched by a weird and an almost oppressive beauty as they lay in the white light.

In one spot only was the solemn monotony of the plain broken. Near the centre a small solitary kopje rose. Alone it lay there, a heap of round ironstones piled one upon another, as over some giant's grave. Here and there a few tufts of grass or small succulent plants had sprung up among its stones, and on the very summit a clump of prickly-pears lifted their thorny arms, and reflected, as from mirrors, the moonlight on their broad fleshy leaves. At the foot of the kopje lay the homestead. First, the stone-walled sheep kraals and Kaffer huts; beyond them the dwelling-house—a square, red-brick building with thatched roof. Even on its bare red walls, and the wooden ladder that led up to the loft, the moonlight cast a kind of dreamy beauty, and quite etherealized the low brick wall that ran before the house, and which inclosed a bare patch of sand and two straggling sunflowers. On the zinc roof of the great open wagon-house, on the roofs of the outbuildings that jutted from its side, the moonlight glinted with a quite peculiar brightness, till it seemed that every rib in the metal was of burnished silver.

Sleep ruled everywhere, and the homestead was not less quiet than the solitary plain.

In the farmhouse, on her great wooden bedstead, Tant Sannie, the Boer-woman, rolled heavily in her sleep.

She had gone to bed, as she always did, in her clothes, and the night was warm and the room close, and she dreamed bad dreams. Not of the ghosts and devils that so haunted her waking thoughts; not of her second husband the consumptive Englishman, whose grave lay away beyond the ostrich-camps, nor of her first, the young Boer; but only of the sheep's trotters she had eaten for supper that night. She dreamed that one stuck fast in her throat, and she rolled her huge form from side to side, and snorted horribly.

In the next room, where the maid had forgotten to close the shutter, the white moonlight fell in in a flood, and made it light as day. There were two small beds against the wall. In one lay a yellow-haired child, with a low forehead and a face of freckles; but the loving moonlight hid defects here as elsewhere, and showed only the innocent face of a child in its first sweet sleep.

The figure in the companion bed belonged of right to the moonlight, for it was of quite elfin-like beauty. The child had dropped her cover on the floor, and the moonlight looked in at the naked little limbs. Presently she opened her eyes and looked at the moonlight that was bathing her.

"Em!" she called to the sleeper in the other bed; but received no answer. Then she drew the cover from the floor, turned her pillow, and pulling the sheet over her head, went to sleep again....