The Story of a Soul (L'Histoire d'une Ame): The Autobiography of St. Therese of Lisieux With Additional Writings and Sayings of St. Therese 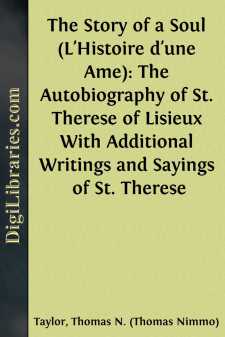 As we become acquainted with the histories of those in whom, in long succession, God has been pleased to show forth examples of holiness of life, it seems as if every phase of human existence had in the history of the Church received its consecration as a power to bring men nearer to their Maker. But there is no limit to the types of sanctity which the Creator is pleased to unfold before His Creatures. To many, on reading for the first time the story of Sister Teresa of the Child Jesus and of the Holy Face, it came almost as a shock to find a very youthful member of an austere Order, strictly retired from the world, engaged in hidden prayer and mortification, appearing before us to reveal to the whole world the wonders of the close intimacy of friendship to which her Divine Spouse had been pleased to call her. Certainly the way by which Soeur Thérèse was led is not the normal life of Carmel, nor hers the manner whereby most Carmelites are called to accomplish the wondrous apostolate of intercession to which their lives are given. But no less certain is it that, in her particular case, her work for God and her apostolate were not to be confined between the walls of her religious home, or to be limited by her few years on earth.

In the first place, we know that it was by obedience that the record of God's dealings with her soul were set down in writing. And again, the long tale of graces granted in such strange profusion through her intercession is proof sufficient that it was not without Divine permission and guidance that the history of her special and peculiar vocation has become the property of all Catholics in every land. It is for God to keep, and for Him to make known the secrets of His Love for men. And in the case of Soeur Thérèse it has been His Will to divulge His secrets in most generous consideration for our needs.

What are the hidden treasures which Our Divine Master thus reveals to us through His chosen little servant?

It is the old story of simplicity in God's service, of the perfect accomplishment of small recurring duties, of trustful confidence in Him who made and has redeemed and sanctified us. Humility, self-effacement, obedience, hiddenness, unfaltering charity, with all the self-control and constant effort that they imply, are written on every page of the history of this little Saint. And, as we turn its pages, the lesson is borne in upon our souls that there is no surer nor safer way of pleasing Our Father Who is in Heaven than by remaining ever as little children in His sight. Doubtless for many of her clients whose hearts are kindled as they read this book, Soeur Thérèse will obtain, as she has done so often in the past, wonderful gifts for health of soul and body. But may she win for all of us without exception a deep and fruitful conviction of the unchanging truth, that unless we become as little children in the doing of our Heavenly Father's Will, we cannot enter into our Eternal Home.