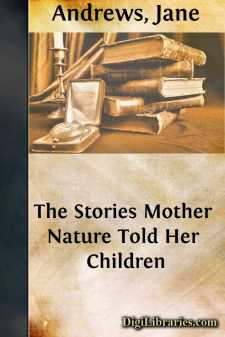 THE STORY OF THE AMBER BEADS

Do you know Mother Nature? She it is to whom God has given the care of the earth, and all that grows in or upon it, just as he has given to your mother the care of her family of boys and girls.

You may think that Mother Nature, like the famous "old woman who lived in the shoe," has so many children that she doesn't know what to do. But you will know better when you become acquainted with her, and learn how strong she is, and how active; how she can really be in fifty places at once, taking care of a sick tree, or a baby flower just born; and, at the same time, building underground palaces, guiding the steps of little travellers setting out on long journeys, and sweeping, dusting, and arranging her great house,—the earth. And all the while, in the midst of her patient and never-ending work, she will tell us the most charming and marvellous stories of ages ago when she was young, or of the treasures that lie hidden in the most distant and secret closets of her palace; just such stories as you all like so well to hear your mother tell when you gather round her in the twilight.

A few of these stories which she has told to me, I am about to tell you, beginning with this one.

I know a little Scotch girl: she lives among the Highlands. Her home is hardly more than a hut; her food, broth and bread. Her father keeps sheep on the hillsides; and, instead of wearing a coat, wraps himself in his plaid, for protection from the cold winds that drive before them great clouds of mist and snow among the mountains.

As for Jeanie herself (you must be careful to spell her name with an ea, for that is Scotch fashion), her yellow hair is bound about with a little snood; her face is browned by exposure to the weather; and her hands are hardened by work, for she helps her mother to cook and sew, to spin and weave.

One treasure little Jeanie has which many a lady would be proud to wear. It is a necklace of amber beads,—"lamour beads," old Elsie calls them; that is the name they went by when she was young.

You have, perhaps, seen amber, and know its rich, sunshiny color, and its fragrance when rubbed; and do you also know that rubbing will make amber attract things somewhat as a magnet does? Jeanie's beads had all these properties, but some others besides, wonderful and lovely; and it is of those particularly that I wish to tell you. Each bead has inside of it some tiny thing, incased as if it had grown in the amber; and Jeanie is never tired of looking at, and wondering about, them. Here is one with a delicate bit of ferny moss shut up, as it were, in a globe of yellow light. In another is the tiniest fly,—his little wings outspread, and raised for flight. Again, she can show us a bee lodged in one bead that looks like solid honey, and a little bright-winged beetle in another. This one holds two slender pine-needles lying across each other, and here we see a single scale of a pine-cone; while yet another shows an atom of an acorn-cup, fit for a fairy's use. I wish you could see the beads, for I cannot tell you the half of their beauty....