The Stewardship of the Soil Baccalaureate Address 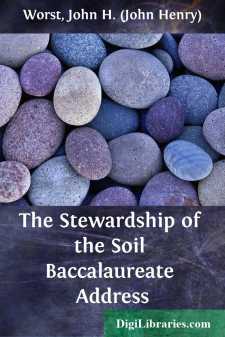 Our ambitious young commonwealth, in conjunction with other states comprising the great Northwest, occupies a commanding position in the industrial and economic affairs of this nation.

Mines of gold and silver or forests primeval North Dakota does not have; but from the millions of fertile acres comprising our vast agricultural empire, we may reap a golden harvest every year that will exceed in wealth the output of all the golden placers in the western mountains.

The harvest of minerals, however, can be gathered but once. Time will not restore the precious nuggets.

The forests once harvested can, at great expense, be renewed in the course of a century; but our harvest of domestic plants and animals recurs with every passing season to recompense the farmer for his toil and to enrich the farmer's friends.

What a precious theme is harvest! The hopes, the well-being, the life of the world is fast bound up in the magic of this single word.

The soil upon which the harvest depends, moreover, is God's benediction to humanity. Measured by consequences, Heaven has vouchsafed no form of stewardship that is fraught with such tremendous responsibilities as this stewardship of the soil. In the final analysis this stewardship represents the farmer's obligation to society.

And yet sacred as is the soil and binding as is the farmer's obligation to society, the means for providing the world's food is nevertheless at his mercy.

It is a well-known fact that the soil can readily be depleted of its fertility and thus robbed of its strength by a system of exploitation, commonly referred to as "extensive farming." Too much of our land is being thus exploited. On the other hand the productiveness of the soil may be very greatly improved. Denmark, Belgium, Germany, and other European nations have fully demonstrated, that by the application of science to the art of agriculture, the productiveness of the soil can be multiplied almost to the limit of necessity.

A Progressive Agriculture. Fortunately Nature has supplied every means for the development of a progressive and permanent agriculture. It is also obvious that it is man's privilege, if not his mission, to improve upon Nature—to substitute quality for mere physical endurance, in agricultural products.

By the grace of Providence the individuals of the animal and vegetable kingdoms were not created inflexible in habit or perfect in form, but they may be changed in character and quality and intrinsic worth at the will of the intelligent and observing farmer. To this end agricultural education lends its beneficent influence. Man's dominion over Nature would be such in name only were it not for the class-room and the laboratory, for research and investigation; for by these means scientific knowledge is obtained and diffused and eventually brought to bear upon the solution of the most vital problems that concern the human family. These problems center largely around food and clothing. To supply these necessities an industry is created—the business of agriculture—the most important industry in all the world. An industry of such fundamental importance, moreover, should receive from the states and from the federal government financial consideration in proportion to its moral and economic importance as well as to the probabilities that may be entertained for its continued improvement....