The Stars and Stripes The American Soldiers' Newspaper of World War I, 1918-1919 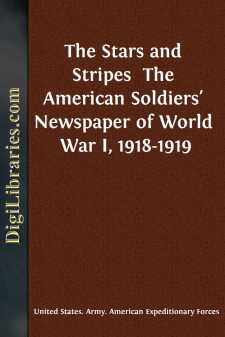 As a great deal of misapprehension regarding leaves, the conditions under which they are to be granted, etc., has existed in the A.E.F. for some time past, the complete and authoritative rulings on the subject are given below.

A.E.F. men whose leaves fall due on or about February 15 will be allowed to visit the department of Savoy, in the south-east of France, during their week of leisure. That department constitutes their "leave zone" for the present. When their next leaves come around four months hence it is planned to give them a different leave zone, and to rotate such zones in future, in order to give all an equal chance to see as much of France as possible.

While the Y.M.C.A. has worked hard and perfected arrangements for soldiers' accommodations and provided amusements at Aix-les-Baines, one of the famous watering-places in Savoy, no man is bound in any way to avail himself of those accommodations and amusements if he does not so desire. In other words, there are no strings attached to a man's leave time, provided he does not violate the obvious rules of military deportment. The widespread idea that there will be official or semi-official chaperonage of men on leave by the Y.M.C.A. or other organizations is, therefore, incorrect.

The general order from Headquarters, A. E. F., on the subject of leaves is both complete and explicit. Leaves will be available for soldiers only after four months' service in France, and will be granted to officers and men in good standing. The plan is to give every soldier one leave of seven days every four months, excluding the time taken in traveling to and from the place in France where he may spend his holiday. As far as practicable, special trains will be run for men on leave.

A man may not save up his seven days leave with the idea of taking one of longer duration at a later date. He must take his leaves as they come. Regular leave will not be granted within one month after return from sick or convalescent leave.

In principle, leaves will be granted by roster, based on length of time since last leave or furlough; length of service in France; length of service as a whole lot. Officers authorized to grant leaves are required to make the necessary adjustments of leave rosters so as to avoid absence of too many non-coms, or specially qualified soldiers at any time. Not more than ten per cent. of the soldiers of any command are to be allowed away at the same time, nor, it is stipulated, is any organization to be crippled for lack of officers.

Leave areas, as stated above, will be allotted to divisions, corps, or other units or territorial commands, and rotated as far as practicable. Allotments covering Paris, however, will be made separately from all other areas, so as to limit the number of American soldiers visiting Paris on leave. For this reason the leave tickets will be of different color, those consigning a man to his unit's regular leave area being white, and those permitting a visit to Paris being pink, dividing the American permissionaires into white ticket men and pink ticket men.

In case a man has relatives in France, it is provided that he may, for that reason or some other exceptional one, be granted leave for another area than that allotted to his unit with the stipulation that the number of men authorized to visit Paris shall not be increased in that way....