The Spread Eagle and Other Stories 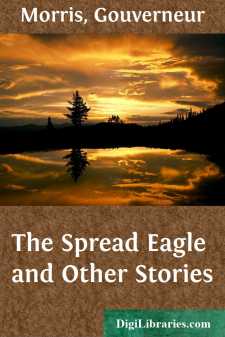 In his extreme youth the adulation of all with whom he came in contact was not a cross to Fitzhugh Williams. It was the fear of expatriation that darkened his soul. From the age of five to the age of fourteen he was dragged about Europe by the hair of his head. I use his own subsequent expression. His father wanted him to be a good American; his mother wanted him to be a polite American, And to be polite, in her mind, was to be at home in French and German, to speak English (or American) with the accent of no particular locality, to know famous pictures when you saw them, and, if little, to be bosom friends with little dukes and duchesses and counts of the Empire, to play in the gravel gardens of St. Germain, to know French history, and to have for exercise the mild English variations of American games—cricket instead of base-ball; instead of football, Rugby, or, in winter, lugeing above Montreux. To luge upon a sled you sit like a timid, sheltered girl, and hold the ropes in your hand as if you were playing horse, and descend inclines; whereas, as Fitzhugh Williams well knew, in America rich boys and poor take their hills head first, lying upon the democratic turn.

It wasn't always Switzerland in winter. Now and again it was Nice or Cannes. And there you were taught by a canny Scot to hit a golf ball cunningly from a pinch of sand. But you blushed with shame the while, for in America at that time golf had not yet become a manly game, the maker young of men as good as dead, the talk of cabinets But there was lawn tennis also, which you might play without losing caste "at home," Fitzhugh Williams never used that term but with the one meaning. He would say, for instance, to the little Duchess of Popinjay—or one just as good—having kissed her to make up for having pushed her into her ancestral pond, "Now I am going to the house," meaning Perth House, that Mrs. Williams had taken for the season. But if he had said, "Now I am going home," the little Duchess would have known that he was going to sail away in a great ship to a strange, topsy-turvy land known in her set as "the States," a kind of deep well from which people hoist gold in buckets, surrounded by Indians. Home did not mean even his father's house. Let Fitzhugh Williams but catch sight of the long, white shore of Long Island, or the Brooklyn Bridge, or the amazing Liberty, and the word fluttered up from his heart even if he spoke it not. Ay, let him but see the Fire Island light-ship alone upon the deep, and up leaped the word, or the sensation, which was the same thing.

One Fourth of July they were in Paris (you go to Paris for tea-gowns to wear grouse-shooting in Scotland), and when his valet, scraping and bowing, informed Fitzhugh Williams, aged nine, that it was time to get up, and tub, and go forth in a white sailor suit, and be of the world worldly, Fitzhugh declined. A greater personage was summoned—Aloys, "the maid of madame," a ravishing creature—to whom you and I, good Americans though we are, could have refused nothing....