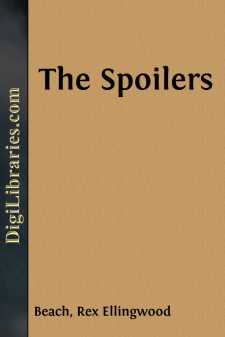 Glenister gazed out over the harbor, agleam with the lights of anchored ships, then up at the crenelated mountains, black against the sky. He drank the cool air burdened with its taints of the sea, while the blood of his boyhood leaped within him.

"Oh, it's fine—fine," he murmured, "and this is my country—my country, after all, Dex. It's in my veins, this hunger for the North. I grow. I expand."

"Careful you don't bust," warned Dextry. "I've seen men get plumb drunk on mountain air. Don't expand too strong in one spot." He went back abruptly to his pipe, its villanous fumes promptly averting any danger of the air's too tonic quality.

"Gad! What a smudge!" sniffed the younger man. "You ought to be in quarantine."

"I'd ruther smell like a man than talk like a kid. You desecrate the hour of meditation with rhapsodies on nature when your aesthetics ain't honed up to the beauties of good tobacco."

The other laughed, inflating his deep chest. In the gloom he stretched his muscles restlessly, as though an excess of vigor filled him.

They were lounging upon the dock, while before them lay the Santa Maria ready for her midnight sailing. Behind slept Unalaska, quaint, antique, and Russian, rusting amid the fogs of Bering Sea. Where, a week before, mild-eyed natives had dried their cod among the old bronze cannon, now a frenzied horde of gold-seekers paused in their rush to the new El Dorado. They had come like a locust cloud, thousands strong, settling on the edge of the Smoky Sea, waiting the going of the ice that barred them from their Golden Fleece—from Nome the new, where men found fortune in a night.

The mossy hills back of the village were ridged with graves of those who had died on the out-trip the fall before, when a plague had gripped the land—but what of that? Gold glittered in the sands, so said the survivors; therefore men came in armies. Glenister and Dextry had left Nome the autumn previous, the young man raving with fever. Now they returned to their own land.

"This air whets every animal instinct in me," Glenister broke out again. "Away from the cities I turn savage. I feel the old primitive passions—the fret for fighting."

"Mebbe you'll have a chance."

"Well, it's this way. I met Mexico Mullins this mornin'. You mind old Mexico, don't you? The feller that relocated Discovery Claim on Anvil Creek last summer?"

"You don't mean that 'tin-horn' the boys were going to lynch for claim-jumping?"

"Identical! Remember me tellin' you about a good turn I done him once down Guadalupe way?"

"Yep! Well, I noticed first off that he's gettin fat; high-livin' fat, too, all in one spot, like he was playin' both ends ag'in the centre. Also he wore di'mon's fit to handle with ice-tongs.

"Says I, lookin' at his side elevation, 'What's accented your middle syllable so strong, Mexico?'

"'Prosperity, politics, an' the Waldorf-Astorier,' says he. It seems Mex hadn't forgot old days. He claws me into a corner an' says, 'Bill, I'm goin' to pay you back for that Moralez deal.'