The Spirit Proper to the Times A Sermon preached in King's Chapel, Boston, Sunday, May 12, 1861 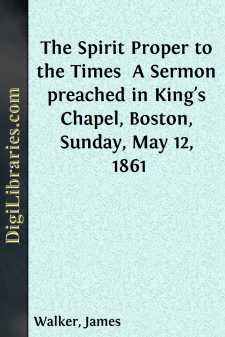 "With such sacrifices God is well pleased."—Hebrews xiii. 16.

I am to speak of public spirit, as manifested in a willingness to make sacrifices for the public good.

The necessity for making sacrifices would seem to be founded in this: as we cannot have every thing, we must be willing to sacrifice some things in order to obtain or secure others. Wicked men recognize and act upon this principle. Can you not recall more than one person in your own circle of acquaintances who is sacrificing his health, his good name, his domestic comfort, to vicious indulgences? Worldly people recognize and act upon this principle. Look at that miser: he is hoarding up his thousands and his tens of thousands, but in order to do so, is he not sacrificing every thing which makes life worth having? It is a mistake to suppose that religion, or morality, or the public necessities, ever call upon us to make greater sacrifices than those which men are continually making to sin and the world, to fashion and fame, to "the lust of the flesh, the lust of the eyes, and the pride of life."

In times of ease, and abundance, and tranquillity, the public takes care of itself. There are few sacrifices on the part of individuals for the public good, because there are few occasions for such sacrifices. They are not made because not called for, because not needed. Moreover, private benevolence is apt at such times to become less active, and, for the same reason, that is to say, because less of it is required.

This state of things is seized upon by those who are eager to put the worst possible construction on human nature and human conduct, as evidence of extreme degeneracy. How often are we to be told that our present troubles are sent upon us in order to lift the whole community out of the mire of money-getting propensities, where every thing like public spirit was in danger of being swallowed up and lost? I protest against this wholesale abuse of what has been,—at best, a gross exaggeration. The whole truth in this matter is told in a few words. By constitution, by habit, by circumstances, our people are intensely active; and this activity, for want of other objects, has been turned into the channels of material prosperity. If, therefore, you merely affirm their excessive eagerness in acquisition, I grant it; but if, not content with this, you go on to charge them with being niggards in expending what they have acquired, I deny it, emphatically, utterly. Read the history of what has been done in this commonwealth, in this city, during the last twenty-five years for humanity, for education, for science and the arts, for every form of public use or human need, and then say, if you can, that public spirit has been dying out. Our people have never been otherwise than public spirited, and hence the promptness and unanimity of their response to this new call to public duty. Hence also our confidence in it,—not as an excitement merely, which a day has made, and a day may unmake, but as an expression of character....