The Spirit of the Age Contemporary Portraits 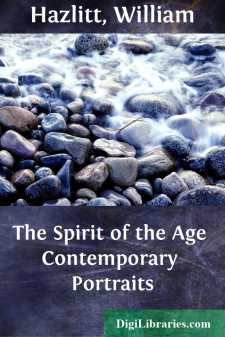 Mr. Bentham is one of those persons who verify the old adage, that "A prophet has no honour, except out of his own country." His reputation lies at the circumference; and the lights of his understanding are reflected, with increasing lustre, on the other side of the globe. His name is little known in England, better in Europe, best of all in the plains of Chili and the mines of Mexico. He has offered constitutions for the New World, and legislated for future times. The people of Westminster, where he lives, hardly know of such a person; but the Siberian savage has received cold comfort from his lunar aspect, and may say to him with Caliban—"I know thee, and thy dog and thy bush!" The tawny Indian may hold out the hand of fellowship to him across the GREAT PACIFIC. We believe that the Empress Catherine corresponded with him; and we know that the Emperor Alexander called upon him, and presented him with his miniature in a gold snuff-box, which the philosopher, to his eternal honour, returned. Mr. Hobhouse is a greater man at the hustings, Lord Rolle at Plymouth Dock; but Mr. Bentham would carry it hollow, on the score of popularity, at Paris or Pegu. The reason is, that our author's influence is purely intellectual. He has devoted his life to the pursuit of abstract and general truths, and to those studies—

"That waft a thought from Indus to the Pole"—

and has never mixed himself up with personal intrigues or party politics. He once, indeed, stuck up a hand-bill to say that he (Jeremy Bentham) being of sound mind, was of opinion that Sir Samuel Romilly was the most proper person to represent Westminster; but this was the whim of the moment. Otherwise, his reasonings, if true at all, are true everywhere alike: his speculations concern humanity at large, and are not confined to the hundred or the bills of mortality. It is in moral as in physical magnitude. The little is seen best near: the great appears in its proper dimensions, only from a more commanding point of view, and gains strength with time, and elevation from distance!

Mr. Bentham is very much among philosophers what La Fontaine was among poets:—in general habits and in all but his professional pursuits, he is a mere child. He has lived for the last forty years in a house in Westminster, overlooking the Park, like an anchoret in his cell, reducing law to a system, and the mind of man to a machine. He scarcely ever goes out, and sees very little company. The favoured few, who have the privilege of the entrée, are always admitted one by one. He does not like to have witnesses to his conversation. He talks a great deal, and listens to nothing but facts. When any one calls upon him, he invites them to take a turn round his garden with him (Mr. Bentham is an economist of his time, and sets apart this portion of it to air and exercise)—and there you may see the lively old man, his mind still buoyant with thought and with the prospect of futurity, in eager conversation with some Opposition Member, some expatriated Patriot, or Transatlantic Adventurer, urging the extinction of Close Boroughs, or planning a code of laws for some "lone island in the watery waste," his walk almost amounting to a run, his tongue keeping pace with it in shrill, cluttering accents, negligent of his person, his dress, and his manner, intent only on his grand theme of UTILITY—or pausing, perhaps, for want of breath and with lack-lustre eye to point out to the stranger a stone in the wall at the end of his garden (overarched by two beautiful cotton-trees) Inscribed to the Prince of Poets, which marks the house where Milton formerly lived....