The Spirit of Japan 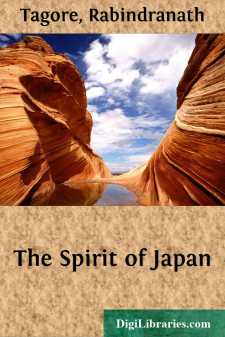 I am glad to have this opportunity once more of speaking to you before I leave Japan. My stay here has been so short that one may think I have not earned my right to speak to you about anything concerning your country. I feel sure that I shall be told, that I am idealising certain aspects, while leaving others unnoticed, and that there are chances of my disillusionment, if I remain here for long. For I have known foreigners, whose long experience has made them doubtful about your moral qualifications,—even of your full efficiency in modern equipments of progress.

But I am not going to be brow-beaten by the authority of long experience, which is likely to be an experience of blindness carried through long years. I have known such instances in my own country. The mental sense, by the help of which we feel the spirit of a people, is like the sense of sight, or of touch,—it is a natural gift. It finds its objects, not by analysis, but by direct apprehension. Those who have not this vision, merely see events and facts, and not their inner association. Those who have no ear for music, hear sounds, but not the song. Therefore when, by the mere reason of the lengthiness of their suffering, they threaten to establish the fact of the tune to be a noise, one need not be anxious about music. Very often it is mistakes that require longer time to develop their tangles, while the right answer comes promptly.

You ask me how I can prove, that I am right in my confidence that I can see. My answer is, because I see something which is positive. There are others, who affirm that they see something contrary. It only shows, that I am looking on the picture side of the canvas, and they on the blank side. Therefore my short view is of more value than their prolonged stare.

It is a truism to say that shadows accompany light. What you feel, as the truth of a people, has its numberless contradictions,—just as the roundness of the earth is contradicted at every step by its hills and hollows. Those who can boast of a greater familiarity with your country than myself, can bring before me loads of contradictions, but I remain firm upon my vision of a truth, which does not depend upon its dimension, but upon its vitality.

At first, I had my doubts. I thought that I might not be able to see Japan, as she is herself, but should have to be content to see the Japan that takes an acrobatic pride in violently appearing as something else. On my first arrival in this country, when I looked out from the balcony of a house on the hillside, the town of Kobe,—that huge mass of corrugated iron roofs,—appeared to me like a dragon, with glistening scales, basking in the sun, after having devoured a large slice of the living flesh of the earth. This dragon did not belong to the mythology of the past, but of the present; and with its iron mask it tried to look real to the children of the age,—real as the majestic rocks on the shore, as the epic rhythm of the sea-waves. Anyhow it hid Japan from my view, and I felt myself like the traveller, whose time is short, waiting for the cloud to be lifted to have a sight of the eternal snow on the Himalayan summit. I asked myself,—'Will the dense mist of the iron age give way for a moment, and let me see what is true and abiding in this land?' I was enveloped in a whirlwind of reception, but I had my misgivings and thought that this might be a violent outbreak of curiosity,—or that these people felt themselves bound to show their appreciation of a man who had won renown from Europe, thus doing honour to the West in a vicarious form....