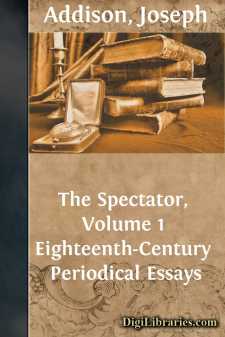 When Richard Steele, in number 555 of his 'Spectator', signed its last paper and named those who had most helped him

'to keep up the spirit of so long and approved a performance,'

he gave chief honour to one who had on his page, as in his heart, no name but Friend. This was

'the gentleman of whose assistance I formerly boasted in the Preface and concluding Leaf of my 'Tatlers'. I am indeed much more proud of his long-continued Friendship, than I should be of the fame of being thought the author of any writings which he himself is capable of producing. I remember when I finished the 'Tender Husband', I told him there was nothing I so ardently wished, as that we might some time or other publish a work, written by us both, which should bear the name of THE MONUMENT, in Memory of our Friendship.'

Why he refers to such a wish, his next words show. The seven volumes of the 'Spectator', then complete, were to his mind The Monument, and of the Friendship it commemorates he wrote,

'I heartily wish what I have done here were as honorary to that sacred name as learning, wit, and humanity render those pieces which I have taught the reader how to distinguish for his.'

So wrote Steele; and the 'Spectator' will bear witness how religiously his friendship was returned. In number 453, when, paraphrasing David's Hymn on Gratitude, the 'rising soul' of Addison surveyed the mercies of his God, was it not Steele whom he felt near to him at the Mercy-seat as he wrote

Thy bounteous hand with worldly bliss    Has made my cup run o'er,  And in a kind and faithful Friend    Has doubled all my store?

The Spectator, Steele-and-Addison's Spectator, is a monument befitting the most memorable friendship in our history. Steele was its projector, founder, editor, and he was writer of that part of it which took the widest grasp upon the hearts of men. His sympathies were with all England. Defoe and he, with eyes upon the future, were the truest leaders of their time. It was the firm hand of his friend Steele that helped Addison up to the place in literature which became him. It was Steele who caused the nice critical taste which Addison might have spent only in accordance with the fleeting fashions of his time, to be inspired with all Addison's religious earnestness, and to be enlivened with the free play of that sportive humour, delicately whimsical and gaily wise, which made his conversation the delight of the few men with whom he sat at ease. It was Steele who drew his friend towards the days to come, and made his gifts the wealth of a whole people. Steele said in one of the later numbers of his Spectator, No. 532, to which he prefixed a motto that assigned to himself only the part of whetstone to the wit of others,

'I claim to myself the merit of having extorted excellent productions from a person of the greatest abilities, who would not have let them appear by any other means.'

There were those who argued that he was too careless of his own fame in unselfish labour for the exaltation of his friend, and, no doubt, his rare generosity of temper has been often misinterpreted....