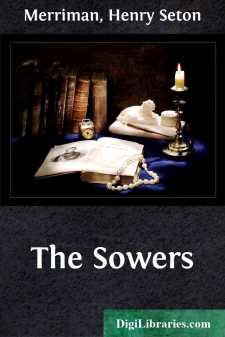 CHAPTER I A WAIF ON THE STEPPE

"In this country charity covers no sins!"

The speaker finished his remark with a short laugh. He was a big, stout man; his name was Karl Steinmetz, and it is a name well known in the Government of Tver to this day. He spoke jerkily, as stout men do when they ride, and when he had laughed his good-natured, half-cynical laugh, he closed his lips beneath a huge gray mustache. So far as one could judge from the action of a square and deeply indented chin, his mouth was expressive at that timeвЂ”and possibly at all timesвЂ”of a humorous resignation. No reply was vouchsafed to him, and Karl Steinmetz bumped along on his little Cossack horse, which was stretched out at a gallop.

Evening was drawing on. It was late in October, and a cold wind was driving from the north-west across a plain which for sheer dismalness of aspect may give points to Sahara and beat that abode of mental depression without an effort. So far as the eye could reach there was no habitation to break the line of horizon. A few stunted fir-trees, standing in a position of permanent deprecation, with their backs turned, as it were, to the north, stood sparsely on the plain. The grass did not look good to eat, though the Cossack horses would no doubt have liked to try it. The road seemed to have been drawn by some Titan engineer with a ruler from horizon to horizon.

Away to the south there was a forest of the same stunted pines, where a few charcoal-burners and resin-tappers eked out a forlorn and obscure existence. There are a score of such settlements, such gloomy forests, dotted over this plain of Tver, which covers an area of nearly two hundred square miles. The remainder of it is pasture, where miserable cattle and a few horses, many sheep and countless pigs, seek their food pessimistically from God.

Steinmetz looked round over this cheerless prospect with a twinkle of amused resignation in his blue eyes, as if this creation were a little practical joke, which he, Karl Steinmetz, appreciated at its proper worth. The whole scene was suggestive of immense distance, of countless miles in all directionsвЂ”a suggestion not conveyed by any scene in England, by few in Europe. In our crowded island we have no conception of a thousand miles. How can we? Few of us have travelled five hundred at a stretch. The land through which these men were riding is the home of great distancesвЂ”Russia. They rode, moreover, as if they knew itвЂ”as if they had ridden for days and were aware of more days in front of them.

The companion of Karl Steinmetz looked like an Englishman. He was young and fair and quiet. He looked like a youthful athlete from Oxford or CambridgeвЂ”a simple-minded person who had jumped higher or run quicker than anybody else without conceit, taking himself, like St. Paul, as he found himself and giving the credit elsewhere. And one finds that, after all, in this world of deceit, we are most of us that which we look like. You, madam, look thirty-five to a day, although your figure is still youthful, your hair untouched by gray, your face unseamed by care....