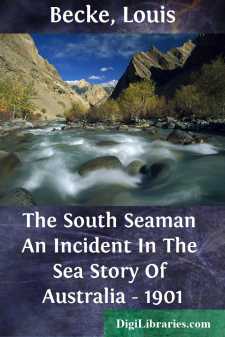 On the 22nd of July, 1828, the Sydney South Seaman, Indefatigable, eleven days out from the Port of Conception in Chili, was in lat 17? S. and about 127? E. long., six hundred miles distant from the nearest land—the then almost unknown Paumotu Group, which Cook had well named the Dangerous Archipelago.

Five years before, the brig was named the Calder, and was then commanded by Captain Peter Dillon, a famous officer in the East India Company's service; his name is interwoven with the sea story of Australia as the commander of the Company's ship Research, and the discoverer of the relics of the gallant and ill-fated La Perouse, whose ships were wrecked on Vanikoro Island, in the New Hebrides group, in 1788.

When the Colder was under the command of Captain Dillon she was a crack Indian trader to Port Jackson, but newer and smarter vessels drove her out of the trade; and in 1828 she was owned by Mr. John Duncan, an English merchant of Valparaiso, who for this present voyage had loaded her with wheat for Sydney, and sent her to sea under the command of Mr. Joseph Hunter, after changing her name to Indefatigable.

The first and second mates of the brig were Europeans, as also were two or three of the crew—the rest were Chilenos, picked up at the last moment of sailing. The steward was a Bengali, a man devoted to his captain, with whom he had long sailed in other seas. The Chilenos were not alone lazy and incompetent seamen, not fit to keep a look-out, nor take the wheel in rough weather, but what was worse, they were treacherous scoundrels, as ready for murder with their long, ugly sheath-knives, as British merchant sailors are with their fists for honest fighting.

Naturally enough, with such men as these the mates frequently quarrelled, and on one or two occasions the officers were driven to resort to blows to maintain proper discipline. And a Chileno, or any other Spanish South American, never forgives a blow, though a knife-thrust or a pistol-shot in the dark would not be considered anything else than proper to vindicate wounded honour. But the mates of the Indefatigable were simple-minded, rough British seamen. They wanted the Chilenos to work the ship like sailormen should work a ship—the Chilenos hated work of any kind, and especially hated the steady discipline of this English merchant ship—the officers of which, when necessity demanded it, would rout out the watch below and send them aloft to shorten sail. And so, in less than a week from the day the brig sailed from Conception, mutiny and murder was plotted in the foc's'cle by the Chilenos, But none of the Englishmen on board had any thought of danger.

Mr. Loftgreen, the chief mate, had the middle watch. It was a marvellously clear and starlight night, with just enough wind astern to keep the brig's light canvas full and give her steerage way. As the officer slowly paced the short poop, he with difficulty resisted the soothing lullaby of the murmur of the water as it rippled past the ship's side.

On the foc's'cle, one of the Chileno sailors, named Antonio Mancillo, kept the watch, and just as Loftgreen, overcome by the stillness of his surroundings, had stopped his walk and was leaning on the rail at the break of the poop, almost dozing—good seaman as he was—he heard the Chileno cry out sharply—

The mate ran hastily forward, but as he reached the short ladder which led to the topgallant foc's'cle, two Chilenos, each carrying a cutlass, sprang upon and seized him by the arms, while Mancillo held the point of a knife to his throat....